The Palgrave Handbook of Political Economy 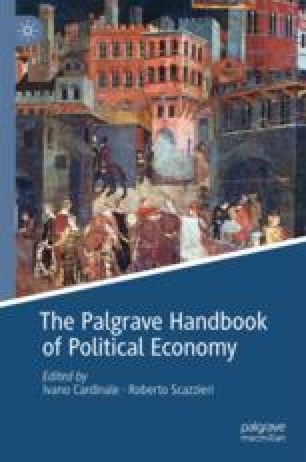 The Palgrave Handbook of Political Economy pp 489-528 | Cite as

Political Economy of Liquidity: The European Economic and Monetary Union

The European Economic and Monetary Union (EMU) is examined according to a network (complex-system) approach. Problems of idiosyncratic, endogenous and systemic risks are addressed. In this perspective, six economic paradoxes of the Euro zone are identified: inflation, liquidity, saving, de-leveraging, central bank balance sheet independence from domestic government debt, and bank capital. They are closely intertwined, but separately identifiable: a common thread is the fallacy of composition. All paradoxes defy current economic policies of EMU, which are critically assessed: suggested lines of an in-depth rethink are predicated by making reference to an enlarged macroprudential policy paradigm. Finally, the concept of liquidity in EMU is critically examined.

Liquidity: The Difficulty of Theorising a Will-o’-the-Wisp

The concept and the term of liquidity have been used in the literature in innumerable not necessarily consistent ways. It is not even clear whether liquidity represents a flow or a stock variable and whether different definitions apply to different economic agents.

Let us start with the classic Keynesian approach to liquidity (although the term long precedes Keynes). Reference should not be made to the General Theory (1936), where the analysis of liquidity preference was introduced, money was viewed as the liquid asset, and the liquidity trap situation became a centrepiece of macroeconomic analysis. It is instead necessary to go back to the Treatise (1930, vol. II, p. 67): one asset is more liquid than another if (i) it is more certainly realisable (convertible into money) with a regular market price at short notice (i.e. marketable) and (ii) without loss. Marketability is a necessary but not sufficient condition for liquidity: marketable assets possess varying degrees of liquidity, while all liquid assets are marketable; their additional key feature is the possibility of liquidating them without incurring in abnormally low prices. It is the latter element which is key in assessing the liquidity spectrum.

It is clear from the above that the use of liquidity in the sense of referring to “moneyness” that different securities are supposed to possess in different degrees is confusing and should be avoided. All securities which can be used for payments functions should be classified as monetary assets (Lucas 1990); it remains true that money and securities with values fairly stable in terms of money represent liquid assets.

Asset liquidity can also be analysed through the asset portfolio selection models (Markowitz 1952), where a key role is played by the Treasury bill market and its corresponding interest rate (the risk-free rate). The interaction between asset portfolio selection and liquidity analysis is very complex (Hicks 1967). Beyond the common argument that the degree of liquidity is a relevant pricing factor for securities (positive premium for holding less liquid securities), attention is drawn to the relevant literature, notably on liquidity betas (Pástor and Stambaugh 2003). To recall, portfolio selection analyses asset choice under uncertainty:
$$r_{a} = r_{f} + \beta_{a} \cdot \left( {r_{m} - r_{f} } \right)$$
(1)
where ra = return of asset a; rf = time value of money = risk-free rate \(\cong\) Treasury bill rate; rm = return on the market portfolio, and βa indicates the risk of asset a compared to the market. The Treasury bill is, in general, a very liquid asset. In the Euroarea imperfect monetary union, its liquidity can however become questionable because of insolvency risk of the sovereign debt of the issuing country. The ECB Quantitative Easing (QE), negative interest rates market interventions, can eliminate/lower the fears of insolvency, but paradoxically reduce its marketability/liquidity.

The following elementary table offers a representation of the various elements introduced so far by making explicit reference to a balance sheet (and, therefore, stock) approach and by a restricting analysis to assets in the financial sector. Assets are, therefore, viewed from the perspective of financial instruments held by economic agents. They could be equally defined as liabilities issued by sectors/operators.

In order to clarify some of the issues related to the analysis of liquidity, a fundamental reference is Hicks (1967, 1974), who draws specific attention to the term structure of the interest rates as a key connecting factor between liquidity preference, monetary analysis and portfolio selection.

M0 (Base Money) is the sum of currency in circulation and banks’ reserves with the central bank. The same definition is given here for perfectly liquid assets (L0). M1 is the sum of currency plus banks’ demand deposits. Also this aggregate is highly liquid being redeemable in terms of base money at par on demand; the principal uncertainty relates to deposits held with banks which might be (become) illiquid or even insolvent. A bank produces perfect liquid asset if the nominal value of its corresponding liability is fully guaranteed (Mazzoni 2016). Liquidity is related to both the store of value and the transactions motives to hold money: in the extreme case of hyperinflation, these features would be lost (Hicks 1974).

In general, liquidity aggregates are a broader measure than broad money, but considerable overlaps exist between liquid and monetary assets. As indicated, this should not lead to confusing the two typologies, and more specifically to defining liquidity with reference to the key attribute of money: the payment for goods and services, the repayment of debt and the acquisition of assets. This approach is not uncommon and is apparently partially endorsed also by the ECB: “The notion of liquidity in the economic literature relates to the ability of an economic agent to exchange his or her existing wealth for goods and services or for other assets. In this definition, two issues should be noted. First, liquidity can be understood in terms of flows (as opposed to stocks), in other words, it is a flow concept. In our framework, liquidity will refer to the unhindered flows among the agents of the financial system, with a particular focus on the flows among the central bank, commercial banks and markets. Second, liquidity refers to the “ability” of realising these flows” (Nikolaou 2009).

The other principle concern with this line of analysis refers to the tenet that liquidity is a flow variable and should be examined strictly in terms of flow analysis. This approach is typically operational and should not be disregarded, but it is evidently incomplete. Liquidity and illiquidity processes are dynamic, stochastic and therefore linked to the passage of time. Measurement of liquidity often requires reference to ratios of both stocks to flows and flows to stocks. It is by no means a coincidence that a famous debate after the publication of the General Theory was precisely on stock vs. flow analysis of liquidity preference and loanable funds theories (Hicks 1939; Patinkin 1958). The interconnectedness should not however lead to fuzziness. Any economic/financial variable is characterised by unit of measurement (m) and time dimension (t): without a precise definition of both, analysis of economic phenomena and processes is necessarily blurred and ultimately unsatisfactory. The concept of liquidity is emblematic of these difficulties. Stock variables exist at a point in time, and flows are defined over a time interval. Capitalisation of flows permits to establish consistent relationships with stocks. The dimension of the reciprocal of the rate of interest with the selected appropriate maturity is the corresponding time interval. As originally explained by Hicks (1974), what is relevant in respect of (stock) liquidity is not “the” rate of interest (defined as the marginal rate of substitution between bonds and money), but the spread between short and long rates (the marginal rate of substitution between bonds and bills).

A key dimension of liquidity is its intrinsic stochastic nature (ECB 2002 and Watanabe 2003), beyond the L0 = M0 stock levels. It is only the value of perfectly liquid assets which is insensitive to the arrival of new information (Diamond and Dybvig 1983; Gorton 2010; de Angelo and Stulz 2013). The problem of statistical modelling of risk can be handled with relative ease in the traditional approach, where the assumptions are made of (i) exogenous/fundamental risk and (ii) Gaussian/stationary distributions. If instead, in the framework of Table 3, allowance is made for endogenous/systemic risk, stochastic volatility can become time-varying. More specifically, assets with uncorrelated statistical distributions under idiosyncratic risk predominance can become highly correlated. The notable exception, as indicated, is represented by central bank liabilities which retain their unique properties. Correlations, volatilities and asset/market/funding liquidities become path dependent and give rise to feedback loops, possible financial bubbles and liquidity spirals.22
Table 3

bIn certain countries and during certain periods, T-bills are included in the official broader definitions of money

cMarketability and liquidity of asset-backed securities (ABS) are dependent upon the liquidity of the collateralising assets; under stress their liquidity can evaporate rapidly

More generally the overall analysis should not be conducted exclusively in terms of individual idiosyncratic risks, but with reference to a holistic approach (Persaud 2016). As indicated in this paper, a complex interdependent system framework is required, which allows for fallacies of composition/division, micro- vs. macro-prudential perspectives, systematic interdependence of economic policies. This broader framework embraces the role and significance of L0 stock analysis and of liquidity creation/support of the central bank (flow approach), notably in its traditional fundamental function of LOLR (Thornton 1802; Bagehot 1873).23 In the Banking Union framework, these key operations are not the direct responsibility of the ECB (Art. 14.4 of the ECB and ELA ECB decision of 18 October 2013) (Lamandini and Munoz 2015).24 Instead, since 2012, the LOLR has been de facto applied by the ECB to the government bond market to break the bank sovereign debt-liquidity/solvency spirals25: this created however a new liquidity problem for Treasury bills, because of the drying up of the market for such securities.