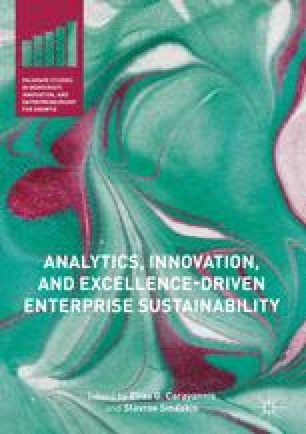 Change Management: Planning for the Future and the Competitive Environment

Chapter
Part of the Palgrave Studies in Democracy, Innovation, and Entrepreneurship for Growth book series (DIG)

This chapter explores critical insights into the process of change in today’s fast-paced competitive environment. The chapter focuses on significant drivers of change and assesses their impact on the external environment of modern companies. How companies will react to all these changes imposed by a number of factors is a subject that is going to be discussed in the following lines. The market reaction to these changes is examined in an attempt to predict future implications and highlight the importance of planning for modern organizations in order to remain competitive in today’s globalized, highly competitive environment. The Structure-Conduct-Performance model, which is a road map for identifying the factors that determine the competitiveness of a market, is applied in order to analyze the behavior of firms and their reactions to changes. Furthermore, Porter’s five forces model is discussed. This model helps to define strategic segment boundaries and reveal insights into the key forces operating in the competitive marketplace. Finally, different market structures are analyzed in order to assess the impact of changes on these markets and the way that the markets are capable of correcting any failures or misallocations of resources available. In this respect, the strategies needed for driving organizational change require an essential set of skills and competencies at the core of the business function.

The gases, which are all naturally occurring, act as a blanket, trapping in the heat and preventing it from being reflected too far from the Earth. They keep the Earth’s average temperature at about 15°C: warm enough to sustain life for humans, plants and animals. Without these gases, the average temperature would be about −18°C: too cold for most life forms. This natural warming effect is also sometimes called the greenhouse effect.

Have agreed as follows:

For the purposes of this Protocol, the definitions contained in Article 1 of the Convention shall apply. In addition:

The original of this Protocol, of which the Arabic, Chinese, English, French, Russian and Spanish texts are equally authentic, shall be deposited with the Secretary-General of the United Nations.

DONE at Kyoto this eleventh day of December one thousand nine hundred and ninety-seven.

IN WITNESS WHEREOF the undersigned, being duly authorized to that effect, have affixed their signatures to this Protocol on the dates indicated.

(Percentage of base year or period)

* Countries that are undergoing the process of transition to a market economy.

Human activities like deforestation, and the burning of fossil fuels like coal, oil or gas, are changing our climate in ways that pose increasing threats to human well-being, in both developing and industrialized nations. We are already experiencing the harmful effects of the climate crisis and we know that more severe damage lies ahead unless we act quickly. The good news is that we can still avoid the most severe impacts of global warming by reducing our emissions of heat trap and gases and halting in reversing deforestation. However, as we work to reduce these emissions of global warming pollution, by investing in renewable energy and by protecting our forests and soils, we must also begin to prepare for the changes already coming, by working to better understand the risks and intergrading these needs into our development planning. Since the beginning of the industrial revolution, when we began to put heat trap and gases in large volumes in the atmosphere, the global average temperature has risen almost one degree Celsius and another eighteenth of the degree is already in store for us because it’s in the ocean and will be released in the atmosphere. If we were not to dramatically reduce our emissions, the global average temperature is expected to raise as much as four or more degrees Celsius by the end of this century, and that would cause severe damage to natural systems and to human health and well-being. Sustained warming of this magnitude could make hundreds of millions of people climate refugees, because of coastal flooding. And as many as a billion or more people at risk of increased water stress. Sustained warming of this magnitude could cause large-scale irreversible changes including the extinction of up to 20–30 % of the world’s plant and animal species. Some of the region’s most at risk for species extinction are areas that are expected to have the most species turnover due to changing climate. In addition, the destabilization and extensive melting of the Greenland and west Antarctica ice seeds, as the number of days of Greenland ice seed melting, has increased dramatically since 1979. And the disappearance of Antarctica’s ice shell and a dozen others warns us that the melting of large areas in west Antarctica and Greenland could cause sea level to rise between 4 and 12 meters, with each meter causing roughly another one hundred million refugees.