The Industrialisation of Soviet Russia Volume 7: The Soviet Economy and the Approach of War, 1937–1939 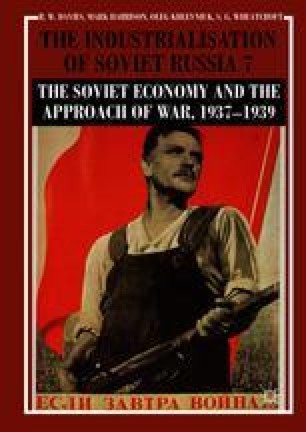 A long-delayed population census was held at the beginning of 1937. The findings were disappointing from the perspective of a regime that saw a large, rapidly growing population as an indicator of its own success. Factors contributing to the failure of the Soviet population to grow as expected included a long-term decline in the birth rate and the large excess mortality of the 1933 famine, an event that had been concealed from the public. The outcome was a collision between the professional expertise of the demographic statisticians and the political authority of the party leaders. The findings were suppressed and many of those responsible were arrested. A second census, held in 1939, again found too few people, but on this occasion Stalin and Molotov were persuaded to accept the findings after relatively minor manipulation.

Stalin TsUNKhU Sautin Voznesenskii Gosplan
These keywords were added by machine and not by the authors. This process is experimental and the keywords may be updated as the learning algorithm improves.
This is a preview of subscription content, log in to check access.