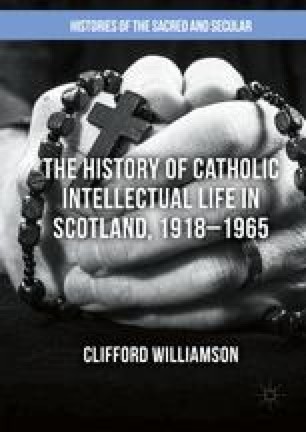 Carfin and the Little Flower

This chapter has as its aim to examine and explain the significance of the Carfin Grotto founded in 1922 in Lanarkshire. Among many circles there was willingness for the Catholic faith to be more visible, challenging secular ideologies in mobilising the people, and second, to deepen faith through the promotion of a more intense piety. These trends had significance in Scotland not only in presenting tangible examples of Catholic Action, but also as they challenged perceived prejudice in Scottish society towards Catholics. This chapter has three elements. The first part considers the role of Mgr Thomas Nimmo Taylor in founding and shaping the Grotto. The second part considers the role of Scots in the growth of the reputation of St Thérèse of Lisieux – the ‘Little Flower of Jesus’ – and then looks at the influence on Scottish piety of the form of spirituality associated with the saint, the so-called ‘new way’. The third and final section considers the role of continental influences through the clergy on the making of Carfin and in particular the influence of the Very Reverend Monsignor Octavius Francis Claeys, a colleague of Mgr Taylor’s at St Peter’s College and a man who shared much the same spiritual outlook as the Carfin priest and who was instrumental in shaping the character of the Grotto and its devotional make-up. This section expands the discussion on Carfin to allow it to be seen not purely as a local phenomenon but as a manifestation of changing trends in European Catholicism.

Religious Identity Catholic Faith Irish Background Scottish Society Catholic Community
These keywords were added by machine and not by the authors. This process is experimental and the keywords may be updated as the learning algorithm improves.
This is a preview of subscription content, log in to check access.