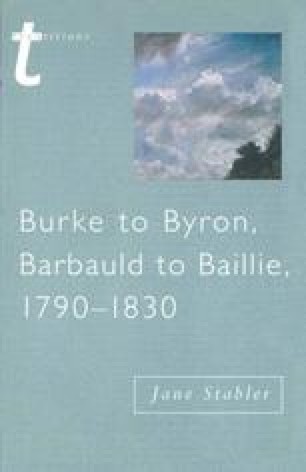 The Romantic Novel and Non-Fictional Prose

As we have seen with Radcliffe’s A Sicilian Romance, the gothic novel reconfigured and transcended some of the later eighteenth century’s pressing social issues. By the mid-1790s, tales of terror were at the pinnacle of their popularity as the feudal conventions of romance met contemporary debates about the feudal basis of power in European society. Gothic conventions permeated other forms of literature as well as the novel and, as we shall see, much of the non-fictional prose of the period drew on gothic motifs.1 Throughout the Romantic period the key gothic image of the haunted family house recurred in debates about the theory of communal life and its actual conditions. By tracing representations of the home in transition through the 1790s to the 1830s, we can examine the rich texture of that most homely of idioms: English prose.