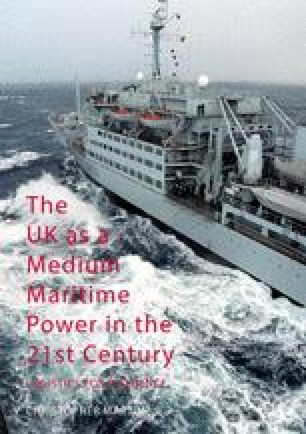 It is a matter of fact that the size of the Royal Navy has contracted significantly since the end of the Second World War. The stark reality of this reduction in numbers is amply demonstrated by noting that in terms of destroyers and frigates, the workhorses of any modern fleet, the Royal Navy possessed 19 in 2010; in 1950 it had 280. A simple decline in numbers is not the entire picture however. The reduction in fleet size is linked to a variety of factors including technology, cost, shifts in global politics and the divesting of formal empire. Furthermore, every navy in the West has seen a general contraction; even the United States Navy (USN) is facing reductions to overall numbers. So, where does the Royal Navy sit amid the hierarchy of the world’s navies today following its fall from dominance? Counting hulls is a crude approach but it does at least provide some means of comparison. If all types of submarines are excluded, as the focus of this study is the surface fleet, the Royal Navy has 57 warships of all types. This compares with China 348, Russia 172, India 130, Japan 88, Brazil 68, France 65, Australia 32 and Canada 22.1 In crude numbers, this places the Royal Navy seventh in rank among these navies.

Operational Autonomy Southern Cone Maritime Security Aircraft Carrier Overseas Territory
These keywords were added by machine and not by the authors. This process is experimental and the keywords may be updated as the learning algorithm improves.
This is a preview of subscription content, log in to check access.