In Search of Israeli-Palestinian Peace 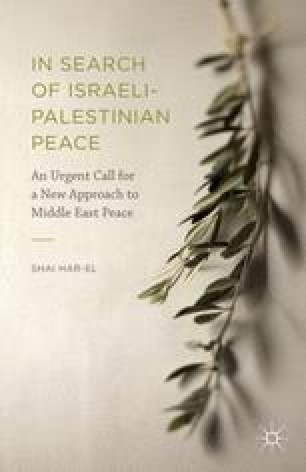 I’ve always argued that Abraham’s legacy could serve as a common ground to achieve an intergroup dialogue and reconciliation. The horrific scriptural story of Abrahams near-sacrifice of his son1—whether it was Isaac, according to the Judeo-Christian tradition, or Ishmael, according to the Islamic tradition—teaches us that God definitely had a purpose in orchestrating this dramatic act. In preventing Abraham from slaying his son, He wanted to give us a lesson. After all, this harsh command of killing one’s son stands in conflict with the Ten Commandments prescribed by both Judaism and Islam. God would not demand Abraham to face such a horrific challenge unless He had a purpose—to guide us, to teach us some rules of behavior and codes of ethics, most importantly that human life is sacred and that human sacrifice is a twisted form of worship that should be eradicated from the face of the earth. This ancient human drama points to God’s intent to send us a message of life over death, teaching over ignorance, consensus over polarization, and peace over destruction.