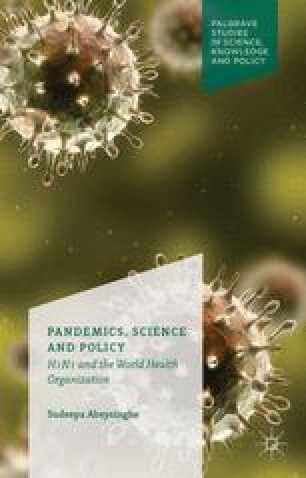 Narrating the Nature of H1N1

For a scientific object or idea to be accepted by all actors who engage with it, it first needs to reach stability as an incontestable ‘fact’. In the case of H1N1, the institution responsible for this fact-making was the WHO, since it is accountable for defining and managing global disease threats. Throughout this book I will examine how the WHO failed to effectively mobilize a stable construction of the ‘H1N1 pandemic’, ultimately resulting in the contestation of the concept by prominent global health actors. However, in order to explore the reasons why the H1N1 pandemic proved to be a fragile concept, it is first necessary to illustrate the elements of the WHO’s initial construction. This chapter examines the WHO’s attempt to define the phenomenon of H1N1. It argues that there were several factors of the construction that lent to its fragility as a scientific fact. These include a lack of early consensus on the name, a failure to articulate a robust and coherent origin narrative, and ineffectual comparisons with seasonal influenza and historical pandemics. These inadequacies meant that the concept of H1N1 did not reach definitional ‘closure’ (Callon, 1986; Pinch and Bijker, 1984), rendering it open to contestation.

Actor Network H1N1 Virus H1N1 Pandemic H1N1 Strain Geographical Spread
These keywords were added by machine and not by the authors. This process is experimental and the keywords may be updated as the learning algorithm improves.
Download to read the full chapter text