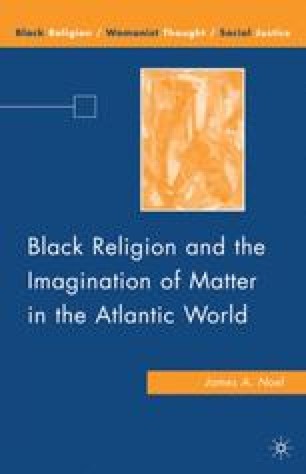 The Imagination of Matter in the Atlantic World’s Political Economy

The above quotation from Long’s Significations situates the modern “self” within the network of exchanges that constituted the “Atlantic world economy of mercantilism and capitalism.” The network of exchanges constituting the Atlantic World determined how people involved in them would conceive the relationship between and among themselves and God and between themselves and nature. The break up of the medieval synthesis made it improbable that theologians could provide a comprehensive framework for merchants, monarchs, nation-states, ecclesiastical bodies, and so on to operate since Christendom was fractured between Roman Catholics and Protestants. What would emerge as a modern sensibility—a modern way of imagining matter—ensued from a number of factors rather than a single cause. Although it is convenient to periodize the transition from the medieval to modern period with the Renaissance/ Reformation there is no way to prove this irrefutably. Some would prefer the Age of Reason and others the Industrial Revolution. For our purposes we are locating the transition to modernity in the long sixteenth century because this is when Europeans first began their Voyages of Exploration that connected Africa, the Americas, and Europe for the first time.

Material Object Sixteenth Century Human Consciousness Slave Trade Sexual Exchange
These keywords were added by machine and not by the authors. This process is experimental and the keywords may be updated as the learning algorithm improves.

Both of these paradigms [Renee Descartes and Max Weber] locate a meaning of the “self” as a form of inwardness that must then negotiate with the world that is “out there.” This “world out there” is necessary for the manifestation and showing of the self, but it does not partake of its inner constitution. This is one of the primary meanings of selfhood that has been evoked within the interstices of the Atlantic world economy of mercantilism and capitalism. What is clear here is that, however the self may be constituted, it is dependent on things, forms, modes, matter—stuff—that it does not create. In the case of the Atlantic world, one of those forms upon which a European American self depended was the bodies of Africans transported as chattel slaves into the New World as the basis for the accumulation of wealth and resources for the mercantile and capitalistic form of production.