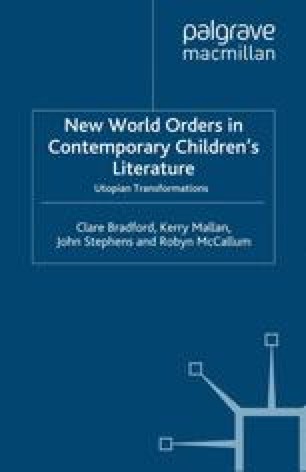 The changing global politics we pointed to in Chapter 1 call for a thorough examination of the rhetoric of utopian imaginings and speculations in children’s texts, and of the ways in which these texts participate in what Ruth Levitas has termed ‘the education of desire’ (1990, pp. 7–8), especially in so far as they mediate ways of regarding the world and offer shape to children’s anxieties and aspirations. In this chapter, therefore, we will consider the variety of themes and narrative forms in which the concept of ‘new world orders’ and ‘transformative utopianism’ are brought into conjuncture. Representations of utopian societies are virtually non-existent in children’s literature, where such representations swiftly disclose themselves as critical utopias (rejecting utopia as blueprint while preserving it as dream — see Moylan, 1986, p. 10). Gloria Whelan’s Fruitlands (2002) or William Nicholson’s The Wind Singer (2000) are notable examples of narratives in which communities ordered and orchestrated ostensibly for the good of all members are revealed, through the perceptions of young enquiring minds, to be repressive patriarchies organised to serve the self-interests of those in control.

America has no empire to extend or utopia to establish. We wish for others only what we wish for ourselves — safety from violence, the rewards of liberty, and the hope for a better life.