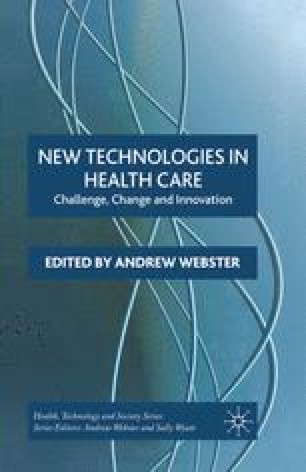 Conventional boundaries of the material and social worlds are increasingly challenged in late modern society. Human and animal matters have been globally mobilised in a worldwide traffic of scientific, medical and commercial transactions. Whilst human implant technologies have a long history, contemporary technoscience has thrown up an ever-wider range of boundary-crossing possibilities for both the body politic and corporeal (Franklin and Lock, 2003; Brown and Webster, 2004). Medicine is now at the heart of an array of combinatorial human, animal and mechanical materials. Whilst the troubled nature of transplantation has been relatively well documented, (e.g. Fox and Swazey, 1978; 1992), less well understood are new forms of innovation that cut across machines, humans and animals raising regulatory concerns about material and cultural risk (Brown and Michael, 2004; Faulkner et al., 2004). At the same time, such hybrids are powerful sources of hope — new treatments for large populations throughout the aging societies, and new sources of wealth for countries seeking a place in the emerging tissue economies.

Stem Cell Therapy Advanced Therapy Medicinal Product Tissue Establishment Medical Device Agency Biotechnological Innovation
These keywords were added by machine and not by the authors. This process is experimental and the keywords may be updated as the learning algorithm improves.
Download to read the full chapter text