Privatization, Corporate Governance and the Emergence of Markets 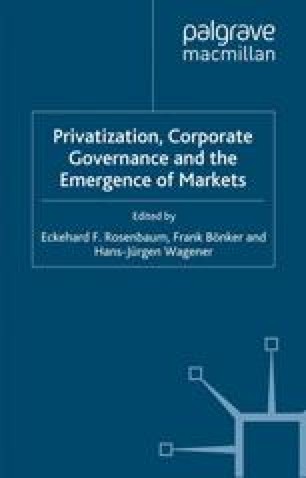 Privatization, Corporate Governance and the Emergence of Markets pp 171-188 | Cite as

Manager Incentives and Turnover of Managers: Evidence from the Czech Republic

The association between corporate performance, managers and incentives is a much studied topic. One strand of literature has been motivated by the notion that financial incentives for managers, in the form of performance contracts, equity ownership and so on, could help align the interest of owners and managers: that is, reduce principal-agent problems, and thereby improve corporate performance and increase market valuation. This topic has been studied extensively (for example, see Murphy, 1985, for the effect of performance contracts on market valuation of firms in the United States, and World Bank, 1996b, for a review of performance contracts for state enterprises). The general finding is that these incentives do not work well for state enterprises, especially in developing countries (and the focus of improving state enterprises’ performance has subsequently shifted to privatization), but work reasonably well for private firms in developed market economies (Jensen and Zimmermann, 1985). Recent theoretical models (Aghion et al., 1994; Blanchard and Aghion, 1996) build on the existing literature and investigate the importance of incentive systems for executive performance in the context of transition economies. Some empirical evidence on the link between executive compensation and enterprise productivity growth during the initial transition period is becoming available (see Jones and Kato, 1996, for a study of Bulgarian firms).

Labour Productivity General Manager Corporate Performance Private Owner Performance Contract
These keywords were added by machine and not by the authors. This process is experimental and the keywords may be updated as the learning algorithm improves.
This is a preview of subscription content, log in to check access.