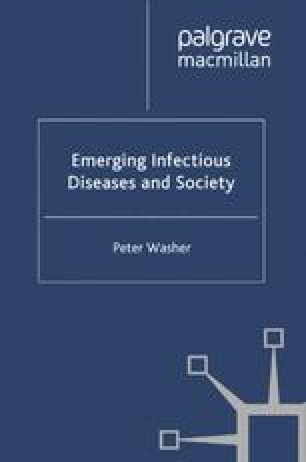 Dirt, Germs and the Immune System

Thus far, the phenomenon of EID have been discussed in relation to the changes associated with late modernity, particularly concerns about globalisation and a heightened awareness of risk. As discussed in Chapter 4, the modern era began in Europe in the eighteenth century, with the advances in science and technology that accompanied the development of industrial capitalism. ‘Modern’ in this sense has a cluster of connotations relating to ‘rational’ and ‘scientific’. Modern explanations of phenomena such as epidemics of infectious diseases ostensibly rely on rational evaluation of evidence gathered using scientific methods. ‘Primitive’ explanations of such phenomena, in contrast, rely on superstition or religious faith, and cast blame on individuals or groups by inventing causal connections between natural events and moral transgressions. This latter type of response is exemplified in allegations of witchcraft.

Eighteenth Century Hygiene Hypothesis Cold Bath Germ Theory Late Modernity
These keywords were added by machine and not by the authors. This process is experimental and the keywords may be updated as the learning algorithm improves.
Download to read the full chapter text