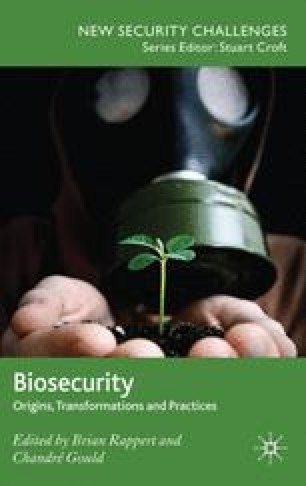 The Importance of China as a Biosecurity Actor

Any discussion of China and biosecurity cannot omit the well-known fact that the Chinese were victims of one of the worst biowarfare campaigns of the twentieth century. During the Second Sino-Japanese War (1937–1945), Unit 731 of the Japanese military dropped plague-infected fleas, aerosolised anthrax, and cholera and typhoid cultures across the country (Guillemin 2005). It is estimated that hundreds of thousands of civilians and military personnel were killed as a result. Although these attacks occurred more than a half century ago, Chinese collective memory of them remain strong and are kept alive through both political and cultural representations. Since becoming a signatory to the Biological and Toxins Weapons Convention (BWC) in 1984, Chinese statements to the Convention have repeatedly referred to its victimisation. On a more public level, the 1987 film Men Behind the Sun, served as a graphic depiction of the bioatrocities committed by Unit 731. The movie’s explicit portrayal of Chinese suffering at the hands of the Japanese Imperial Army caused public outrage in Japan and led to death threats against the film’s director. More recently, memories of biowarfare surfaced in 2003, when 29 people were hospitalised after a construction crew in north-east China inadvertently dug up Japanese-produced chemical shells that had been buried during the war.

Sandia National Laboratory Biological Weapon Export Control Infectious Disease Outbreak Infectious Disease Hospital
These keywords were added by machine and not by the authors. This process is experimental and the keywords may be updated as the learning algorithm improves.
Download to read the full chapter text