Legacies of Plague in Literature, Theory and Film 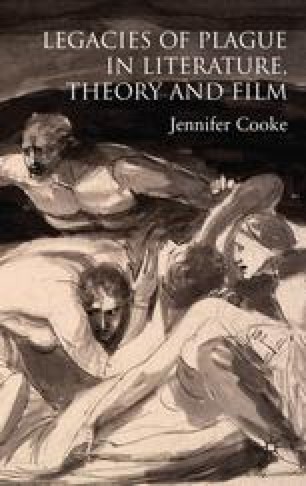 Legacies of Plague in Literature, Theory and Film pp 163-184 | Cite as

Plague, Zombies and the Hypnotic Relation: Romero and After

Plague, epidemics and infectious diseases are no strangers to the cinema screen. The films which stage them fall broadly into three categories: firstly, those in which plague and the mass, mysterious, random and painful deaths it brings are utilised to raise questions about religious faith and belief in an afterlife, to explore the concept of redemption and the assumption that human existence is purposeful or ordained. The most influential of these remains Ingmar Bergman’s The Seventh Seal (1957), in which a knight and his squire return from the Crusades to a plague-ravaged countryside, through which flagellants travel and where they witness a woman burnt at the stake for consorting with the devil and therefore bringing plague upon the people.1 The events these two wanderers experience among the plague-stricken feed the knight’s crisis of faith and culminates in a dramatic chess game with death. In the second category, there are films in which plague or epidemic is used to explore a different type of crisis, centring on the need for containment and how that affects the population and those making decisions on their behalf. Typically this involves several difficult ethical dilemmas for the medical and scientific community, and also for the political and military representatives who are inevitably involved in the management of a large-scale infectious disease outbreak.

Yersinia Pestis Pleasure Principle Death Drive Armoured Vehicle Zombie Group
These keywords were added by machine and not by the authors. This process is experimental and the keywords may be updated as the learning algorithm improves.
Download to read the full chapter text

Cite this chapter as:
Cooke J. (2009) Plague, Zombies and the Hypnotic Relation: Romero and After. In: Legacies of Plague in Literature, Theory and Film. Palgrave Macmillan, London