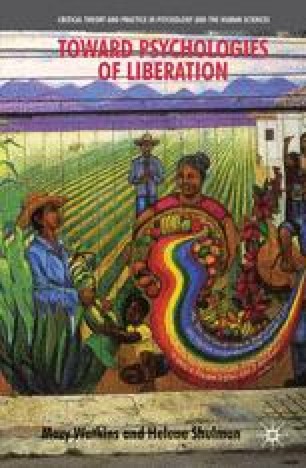 Toward Psychologies of Liberation pp 64-80 | Cite as

From Bystanding toward Engaged Witness

While many of those oppressed have described the intrapsychic wounds that are spawned by the dislocations and culture-cides of colonialism and globalization, those who have profited most from colonialism and transnational capitalism have had disincentives to reflect on the psychological correlates of being involved in oppressive structures. In large-scale industrialized societies, it has been hardest to recognize, describe, and begin to address the pathologies of bystanding. These pathologies are often normalized. Their cultural roots are unacknowledged; their dynamics largely unexamined; and their societal function unnamed. Bystanding allows status quo distributions of power and privilege to go unchecked, giving rise to what Arno Gruen (2007) has called the “insanity of normality.” To question the psychic damage exacted through bystanding often requires unflinching examination of the psychic cost of privilege. Perhaps, if the mutilations of self that bystanding entails were more widely recognized, the courage could be gathered to confront the situations to which one otherwise capitulates. For those in colonizing cultures, colonial ideologies have contributed to dissociating the personal from the political, building a sense of private interiority that is strangely disconnected from historical and cultural context.

Unfair Labor Practice Psychic Life Psychic Cost Oppressive Structure Pathological Narcissism
These keywords were added by machine and not by the authors. This process is experimental and the keywords may be updated as the learning algorithm improves.

The emptier our hearts become, the greater will be our crimes. … It is a terrible and inexorable law that one cannot deny the humanity of another without diminishing one’s own: in the face of one’s victim, one sees oneself.

Cite this chapter as:
Watkins M., Shulman H. (2008) From Bystanding toward Engaged Witness. In: Toward Psychologies of Liberation. Critical Theory and Practice in Psychology and the Human Sciences. Palgrave Macmillan, London