SARS, Governance and the Globalization of Disease 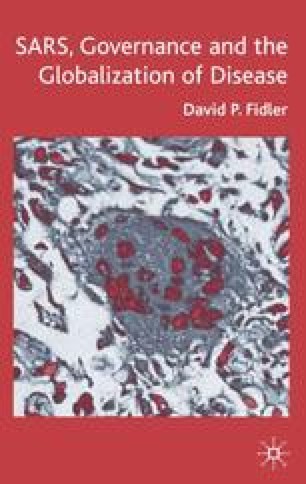 SARS, Governance and the Globalization of Disease pp 106-131 | Cite as

The successful handling of the SARS outbreak by WHO’s global campaign was a significant victory for public health. The success of the SARS effort stands in marked contrast to a parade of worsening infectious disease problems identified in the 1990s and early 2000s under the moniker of ‘emerging and re-emerging infectious diseases.’ Thinking about why the SARS campaign achieved stunning results does not lead analysis into biomedical technologies, such as vaccines, which have contributed greatly to improvements in prevention, control, and eradication of other pathogenic threats, such as smallpox. The WHO-led global campaign contained SARS without having access to adequate diagnostic technologies, effective anti-viral therapies, or a vaccine. The public health instruments at the forefront of the SARS battle were surveillance, isolation, and quarantine, which were the main tools of infectious disease control in the historical era before the development of the arsenal of vaccines and antibiotics.

Global Public Good Health Governance Infectious Disease Control International Health Regulation Global Health Governance
These keywords were added by machine and not by the authors. This process is experimental and the keywords may be updated as the learning algorithm improves.
Download to read the full chapter text