Chasing Religion in the Caribbean 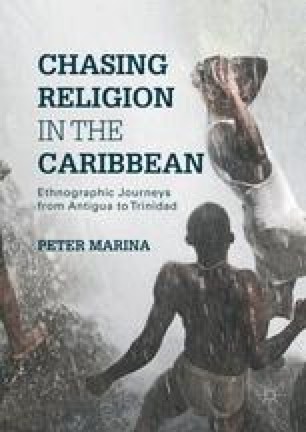 Chapter 4 begins with a descriptive scene juxtaposing Apostle Stephen Andrew’s large PAWI church with Pastor Matthew Noyce’s small, institutionally unaffiliated church to highlight the striking contrasts between Charismatic styles and types of religious networking across borders. An analysis follows on religion and culture in the Caribbean before delving into the personal lives of Apostle Andrews and Pastor Noyce to reveal the types of religious networking strategies religious leaders and pastors use to impact their local communities and the larger Caribbean region. This chapter develops a four-fold typology of the types of transnational religious networking strategies that religious Charismatic leaders use that will be developed throughout the remaining chapters. The chapter ends with a powerful scene while island hopping with the PAWI leader Reverend Henry Nigel.