The Chemistry of Pheromones and Other Semiochemicals I 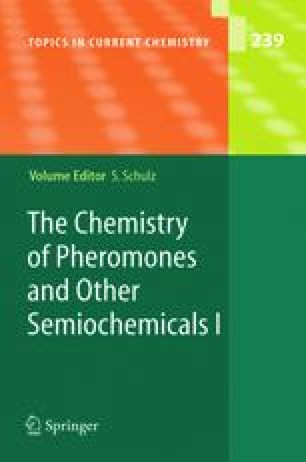 As a consequence of the diversity of Lepidoptera, including 150,000 described species, interesting species-specific sex pheromone systems are exhibited in this insect group. The quite varied pheromones, which have been identified from female moths of nearly 530 species from around the world, are classified into groups of Type I (75%), Type II (15%), and miscellaneous (10%), according to their chemical structures. Additionally, many pheromones produced by male moths and butterflies have been known. While new sex pheromones from about 70 lepidopteran species have been reported in the last five years utilizing GC-EAD, GC-MS, LC, and NMR, our information about the pheromones is still rudimentary, and these kinds of semiochemicals remain an exciting research target for natural product chemistry. In addition to the overview of their chemical structures, this chapter deals with current methods for their identification. Furthermore, an actual application of the synthetic pheromones for pest control is briefly introduced.