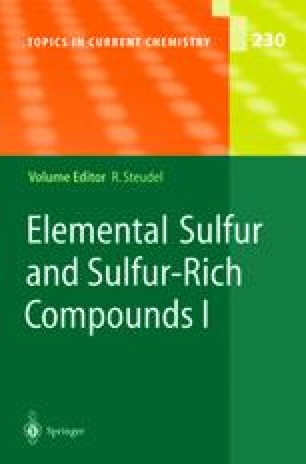 The molecular composition as well as the physical properties (including spectra) of liquid sulfur are reviewed starting with a historic Introduction to explain the terms π-sulfur and μ-sulfur . At all temperatures the melt contains homocyclic rings of between 6 and at least 35 atoms with S8 as the majority species as well as polymeric sulfur (S∞) which becomes a major component only above 170 °C. The polymer probably consists of very large rings at temperatures below 157 °C but above this temperature very long diradicalic chains occur in addition. At temperatures above 300 °C highly colored small molecules like S3 and, at even higher temperatures, S4 can be detected spectroscopically. According to quantum-chemical calculations branched rings (clusters) will be minor components at temperatures near the boiling point only. The temperature dependence of the composition is explained and the various polymerization theories for the transformation of S8 into S∞ as well as the molecular nature of the polymer are discussed. In addition, the various analytical techniques applied to solve the composition problem of liquid sulfur are described.