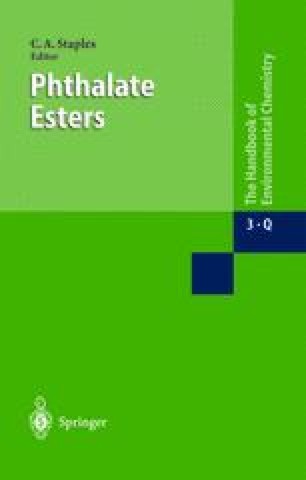 The aquatic toxicity of Phthalate esters is discussed in this chapter. This chapter begins with an examination of the physico-chemical properties of phthalate esters that have a significant influence on toxicity. Acute and chronic toxicity are then reviewed with a focus on chronic effects. This chapter concludes with a discussion of studies that have examined the potential for endocrine modulating effects of phthalate esters in aquatic organisms. Perhaps what is most notable about phthalate esters with regard to their physico-chemical properties is that they demonstrate a solubility cut-point (threshold) so that phthalate esters with alkyl chain length of C6 or greater have water solubilities less than 1mg/L. The acute and chronic toxicity data show that while the lower phthalates (<C6) demonstrate toxicity, the higher phthalates (≥C6) are not toxic to aquatic organism (fish, algae, invertebrates); even at concentrations up to the limit of solubility. It has been suggested that the lack of toxicity for the higher phthalates is related to their relative insolubility in water and their ready metabolism by aquatic organisms, so that the critical body burden for toxicity is not reached. The evidence for endocrine modulation effects caused by phthalate esters is equivocal. Studies from a few in-vitro and in-vivo assays have suggested that DBP and BBP, but no other phthalate ester, were capable of interacting with estrogenic receptors. Testis-ova in male gonads and induction of hepatic vitellogenin have occasionally been reported for some phthalate esters at very high doses. These findings, occurring at concentrations already considered to be toxic based on conventional studies, were not supported upon repetition of the original study or were reported in studies that employed injection of test material into individual fish. Inter-peritoneal injection is an inappropriate route of administration for phthalates because they are known to under undergo metabolism before they enter the systemic circulatory system.