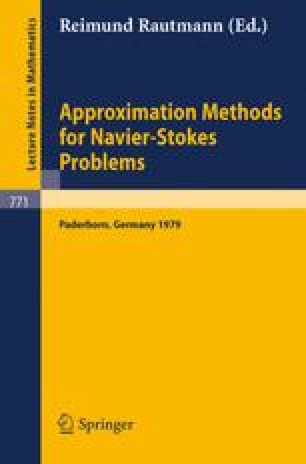 When the boundary of a fluid domain has any sharp corners, an understanding of the asymptotic structure of the flow near the corners is invariably helpful as a preliminary to determining the overall flow structure, and as a means of checking subsequent numerical calculations. The simplest example is that of Poiseuille flow along a sharp corner; a less simple example is the low Reynolds number flow between two hinged plates in relative angular motion. These problems are discussed here in §§1 and 2 (full details are given in Moffatt & Duffy 1979) and it is shown that the local similarity solution is not invariably asymptotically valid near the corner, but that it may (for certain ranges of corner angle) be dominated by ‘eigenfunction’ contributions which are sensitive to conditions remote from the corner. For critical angles, a transitional behaviour occurs.

In §§3–5, further examples are discussed of problems for which, despite the existence of a local similarity solution, the flow may (again for certain angle ranges) be dominated by eigenfunction contributions which may imply the presence of an infinite sequence of eddies in the corner (Moffatt 1964). These examples include the curved duct problem of Collins & Dennis (1976), the free convection problems of Liu & Joseph (1977), and the secondary flow problem in a cone-and-plate viscometer (Hynes 1978).

Secondary Flow Critical Angle Sharp Corner Complementary Function Corner Angle
These keywords were added by machine and not by the authors. This process is experimental and the keywords may be updated as the learning algorithm improves.
This is a preview of subscription content, log in to check access.