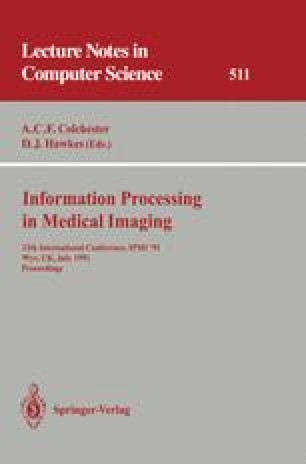 The methodologies for the generation of model describing two echoes of MR pathological images of the head are presented. A vocabulary set has been chosen and formalized consisting of attributes and relations for the characterization of the organs and tissues contained in the image. The analitic study of a training set of images, associated with expert aid for medical aspects has permitted the creation of the model whose robustness has been proved on a set of test images. The most important and innovative characteristics of the model are the hierarchical subdivision between organ-father and sub-organs, together with the distinction between anatomical and acquisition-dependent properties of the image.

The results obtained by utilizing the model inside the system IBIS, devoted to image recognition, are presented. The same model has been used for various patients, thus proving its ability to face individual variabilities. For each patient the cerebrum, the pars ossea, the cutis, and the pathological area (where present) have been recognized with sufficient accuracy, while the ventricle has often been identified with lower precision.