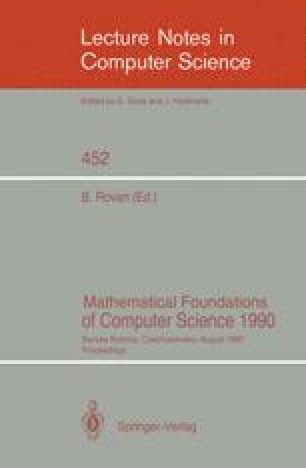 Y. Gurevich recently proposed a framework for semantics of programming concepts which directly reflects the dynamic and resource-bounded aspects of computation. This approach is based on (essentially first-order) structures that evolve over time and are finite in the same way as real computers are (so-called “dynamic algebras”). See Gurevich 1988 for the idea of dynamic algebras and its application to an operational semantics for Modula 2 (Gurevich & Morris 1988), Smalltalk (Blakley 1990), Occam (Gurevich & Moss 1990).

We use dynamic algebras to give an operational semantics for Prolog which, far from being hopelessly complicated, unnatural or machine-dependent, is simple, natural and abstract and in particular supports the process oriented understanding of programs by programmers. In spite of its abstractness, our semantics can easily be made machine executable (see Kappel 1990 for an implementation). It is designed for extensibility and as a result of the inherent extensibility of dynamic algebra semantics, we are able to proceed by stepwise refinement.

We give this semantics for the full language of Prolog including all the usual non-logical built-in predicates. Our specific aim is to provide a mathematically precise but simple framework in which standards can be defined rigorously and concisely and in which different implementations may be compared and judged.

The paper is organized as follows: in section 1 we will define the notion of dynamic algebra adapted from Gurevich 1988 and fix our language. In sections 2 and 3 we will review the core of Prolog algebras which governs the selection mechanism of clauses under bracktracking and the usual control features. To take into account reactions and suggestions of practitioners to our treatment in Part I we

In this way, this paper can be read independently of Part I although for sake of brevity we do not repeat here many verbal explanations, examples and motivating discussion, for which the interested reader is refered to Part I. In section 4 we describe the extensions needed for the usual built-in dabase predicates. In section 5 we will give references to related work in the literature.

Logic Program Operational Semantic Transition Rule Resolution State Denotational Semantic
These keywords were added by machine and not by the authors. This process is experimental and the keywords may be updated as the learning algorithm improves.
This is a preview of subscription content, log in to check access.