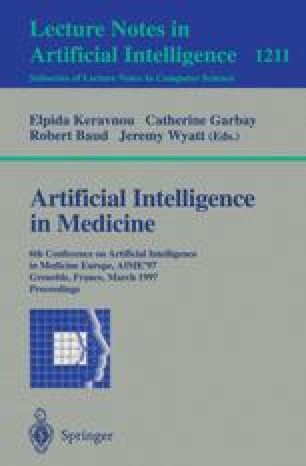 Conference on Artificial Intelligence in Medicine in Europe

A new approach to feature selection

The design of classifiers for medical decision tasks is often based on a small set of high dimensional feature vectors. Therefore we have to curtail the effect of the curse of dimensionality phenomenon on the complexity of the classifier by the application of data pre-processing techniques [Dev82].

One possible way to reduce the dimensionality of the input space is to select a subset of features which give the best characterisation of the class membership of the given feature vectors. This technique, which is called ”feature selection” is also very interesting for knowledge acquisition because the calculated feature subset can be examined by the medical expert to improve the decision process and the data acquisition technique.

The main drawback of the feature selection techniques known so far is, that their search procedures for optimal feature subsets are very time consuming when the dimension of the feature vectors is high.

We present a new feature selection technique which leads to a high reduction of computation time by determining the feature subset through ”learning” according to neural network techniques.