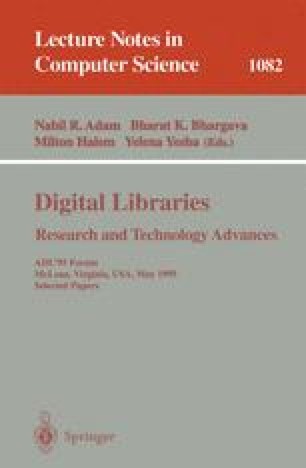 Forum on Advances in Digital Libraries

A metadata scheme for a DL must handle all possible cases of DL objects. Owing to the limited focus of different metadata standards, it is likely that more than one will need to be implemented. The larger number of fields available does not mean that each metadata record will use all of them. Query response time is the crucial element for metadata scheme implementation. Metadata ingest in manual or automated form determines the quantity and quality of data stored in the metadata repository. The Alexandria Project will continue to evaluate and develop prototype metadata repositories. It is likely that a data model suitable for all DL requirements may be composed of multiple paradigms such as Relational-Object-Oriented or other combinations.

Digital Library Rapid Prototype Structure Query Language Storage Component Query Response Time
These keywords were added by machine and not by the authors. This process is experimental and the keywords may be updated as the learning algorithm improves.

Work reported in this paper is supported by funding from NSF, ARPA, and NASA under NSF IRI94-11330 and by product contributions from the Digital Equipment Corporation and the Environmental Systems Research Institute, Inc.