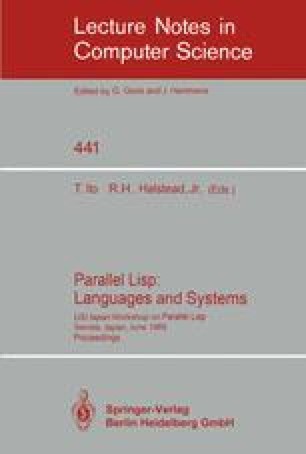 The design of automatic parallelizers for symbolic and numeric programs

Parcel was arguably the first complete system for the automatic parallelization of Lisp programs. It was quite successful in several respects: it introduced a sharp interprocedural semantic analysis that computes the interprocedural visibility of side-effects, and allows the placement of objects in memory according to their lifetimes; it introduced several restructuring techniques tailored to the iterative and recursive control structures that arise in Lisp programs; and it made use of multiple procedure versions with a flexible microtasking mechanism for efficient parallelism at run-time. Parcel had several shortcomings however: the intrinsic procedures of Scheme, and those added to Parcel for support of parallelism, were embedded in its interprocedural analysis, transformations, code generation and run-time system, making the system difficult to adapt for other source languages; its interprocedural analysis handled compound, mutable data only indirectly (by analogy to closures), making it less accurate and more expensive than necessary; and its representation of programs as general control-flow graphs made the implementation of complex transformations difficult.

Miprac is a successor to Parcel, in which we are extending the techniques of Parcel, and applying them to a broad class of procedural languages. Miprac's interprocedural analysis includes a gcd test for independence among memory accesses that fall within a single block of storage; consequently, it may be used to analyze programs that create blocks of storage (structures, vectors) dynamically, and access them either by constant or computed offsets. Like Parcel's, this analysis computes the lifetimes of objects and the visibility of side-effects upon them, but also discerns properties of their structure.

Intermediate Form Sequential Version Source Language Input Program Parallel Loop
These keywords were added by machine and not by the authors. This process is experimental and the keywords may be updated as the learning algorithm improves.