Computer Aided Learning and Instruction in Science and Engineering 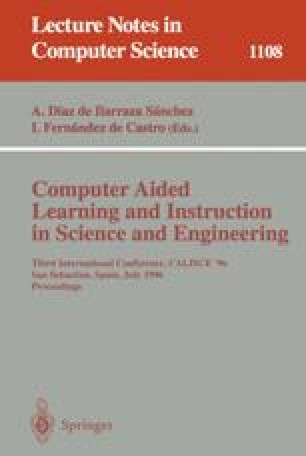 CALISCE 1996: Computer Aided Learning and Instruction in Science and Engineering pp 331-339 | Cite as

The Analogical Model-based Physics System: A workbench to investigate issues in how to support learning by analogy in physics

Learning by analogy has been advocated by a number of researchers in science education [5, 3, 8]. Other researchers have argued against any reliance on analogy at all. Hence there is still some debate about how to utilise analogies in science education. Our concerns here are twofold: how to provide computer-based support for students, and understanding the ways in which students can efficiently exploit analogical forms of reasoning. These two concerns form the motivation for the construction of the Analogical Model-based Physics System (AMPS).

There are several problems worth further exploration that contribute to the justification for AMPS: much teaching by analogy takes place in a manner which does not provide students with effective support for the construction of their own understanding of the domains utilised; students are frequently found to have a poor grasp of the ‘base’ domain being exploited by the teacher; there is a commonly held belief that students require to formulate a ‘complete’ analogy between the putative ‘base’ and ‘target’ domains before they can engage in analogical reasoning; finally, it is an open question as to how to support students in their utilisation of analogical reasoning.

AMPS is a workbench built to explore issues in learning about circuits — both electric and water ones — through analogy. Its design has been informed by research on conceptual change, teaching about electricity and water, the promotion of reflective thought, and — to a lesser extent — computer supported cooperative learning (CSCL). It is being further developed into an Intelligent Learning Environment (ILE) for exploratory learning.

Electrical Circuit Conceptual Change Analogical Reasoning External Representation Thin Wire
These keywords were added by machine and not by the authors. This process is experimental and the keywords may be updated as the learning algorithm improves.
This is a preview of subscription content, log in to check access.