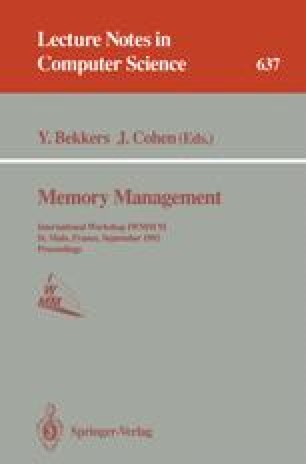 Although the LISP community have been exploiting the fruits of generational garbage collection for some time, little attempt has been made to apply these ideas in lazy functional language implementations. This paper attempts to plug that gap.

The action of overwriting an unevaluated thunk with its final value, known as updating, is central to lazy reduction systems. Unfortunately, updating creates pointers from older to younger generations. A simple two-generation scheme which allows heap occupancy to approach 100% is presented. This collector is a hybrid semispace and mark-scan collector. We show that keeping track of old-to-new pointers imposes virtually zero time and space overhead on the mutator. Consequently a net performance gain can be had by using generational collection.

This paper describes how a generational collector was incorporated into a standard G-machine interpreter. Detailed performance measurements presented indicate that a significant improvement in overall performance is achieved, compared to both semispace and compacting mark-scan collectors. Some interesting variants of the basic scheme are discussed. Finally, a possible compiled-code implementation is presented.