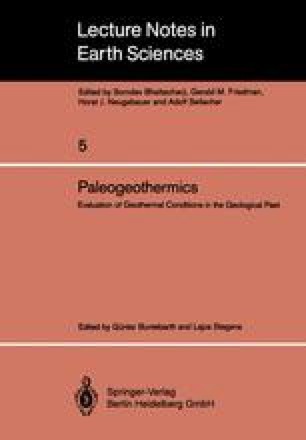 Model calculations were performed to determine the temperature disturbance caused by magmatic intrusions and extrusions. It was our major interest to estimate the influence of this extra heat on the maturation of organic matter in sedimentary basins. The calculations show that there is no real “telemagmatic” thermal effect. Appreciable maturity increase of organic matter is confined to a “zone of influence” which is next to the intrusion and its dimensions are comparable to those of the intrusive body. This moderate influence, however, can be significant if the sedimentary rocks are not very immature but are close to the oil-generation window at the time of volcanic activity. The model calculations were applied to the North Hungarian area of Middle Miocene volcanic activity. We conclude that igneous masses of large dykes and stratovolcanoes could have driven Paleogene sedimentary rocks into the oil-generation window.