Analysis and Optimization of Systems 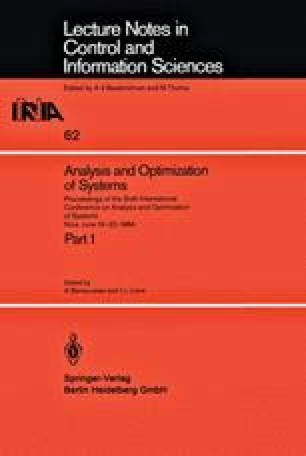 Analysis and Optimization of Systems pp 1-14 | Cite as

Many nonstationary random processes exhibit a "frequency modulated" structure. In this paper a method of modelling such processes as the output of a time variable filter driven by white noise is described. The basis of the method relies on producing a process that is "covariance equivalent" to the process under consideration. This particular formulation makes it possible to predict the evolutionary (time-frequency) spectral density of the process.

The theoretical basis of the method is explained and this is followed by a detailed example which illustrates the theory. The example is concerned with the prediction of the evolutionary spectral density of the motion of a vehicle accelerating over rough terrain. The terrain is described as a spatially homogeneous random process and the nonstationarity of the response arises because of the variable velocity of the vehicle.

The covariance equivalent formulation is quite general and other applications (which include problems in acoustics) are noted.

State Transition Matrix Nonstationary Process Rough Terrain Shaping Filter Evolutionary Spectrum
These keywords were added by machine and not by the authors. This process is experimental and the keywords may be updated as the learning algorithm improves.
This is a preview of subscription content, log in to check access.