Graph-Grammars and Their Application to Computer Science 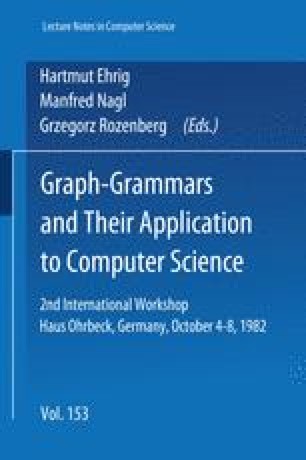 International Workshop on Graph Grammars and Their Application to Computer Science

Graph Grammars 1982: Graph-Grammars and Their Application to Computer Science pp 349-368 | Cite as

This paper deals with a class of grammars which is called tree-graph grammar (TGG) and its attributed version (ATGG, attributed-tree-graph grammar). The features of this class of grammars include its power to generate useful graphs and its fast parser. Principally, the graphs that can be characterized by these grammars are a subset of hierarchical graphs, including planar graphs. Also these TGG's (and ATGG's) can generate graphs describing, for example, textures, flow charts, circuit diagrams, etc. It is proved that the class of context-free graph grammars (CFGG) is a subclass of TGG's. Also it is shown that TGG can generate graphs which can not be produced by CFGG's, for example, planar graphs. Moreover, a parser for ATGG's is proposed. This parser has time complexity of 0(n4) (n is the number of nodes of the graph plus the number of superimposed nodes), and space complexity of 0(n2). For the special case where the starting node is given, the time complexity is reduced to 0(n3). Finally, an application of ATGG's to the recognition of circuit diagrams is presented.

Time Complexity Planar Graph Production Rule Circuit Diagram Input Graph
These keywords were added by machine and not by the authors. This process is experimental and the keywords may be updated as the learning algorithm improves.

This work is supported in part by the NSF Grant ECS 78-16970. The research was performed when A. Sanfeliu was visiting Purdue University in 1979–81.