Blackness as a Defining Identity 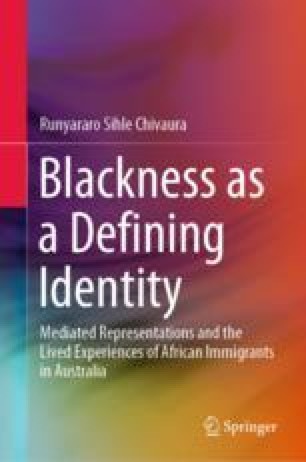 Blackness as a Defining Identity pp 71-99 | Cite as

The Language of Moral Panics and Invisibility

With Africans being a relatively new immigrant group in Australia, much of the information about how they adapt to their new lives in Australia, as well as how they appropriate their everyday identities in social and private settings is largely unknown. Academic research that has been carried out regarding African immigrants in Australia tends to focus on two particular groups—refugees and asylum seekers (Baak in African Identities 9(4):417–434, 2011; Due, Australian Critical Race and Whiteness Studies Association Journal 4(1), 1–13, 2008; Gatt, International Journal of Comparative and Applied Criminal Justice 35(3), 207–219, 2011; Hatoss & Huijser, Gender and Education 2010; Hatoss & Sheely, 22(2), 147–160, 2008; Nolan et al., Journal of Intercultural Studies 32(6), 655–671, 2011, Patterns of Prejudice 50(3), 253–275, 2016; Nunn, Journal of Intercultural Studies 31(2), 183–198, 2010; O’Doherty & Lecouteur, Australian Journal of Psychology 59(1), 1–12, 2007; Warriner in Language learning and the politics of belonging: Sudanese women, Anthropology & Education Quartery 38(4), 343–359, 2007; Windle, Social identities 14(5), 553–566, 2008). The research engages strongly with how these groups of Africans are represented in Australian media, specifically Australian newspapers. The themes discussed centre around the depiction of predominantly the Sudanese Africans great migration from ‘war torn’ ‘guerrilla run’ lands and their difficulty with adapting to their ‘new’ Australian lives. The nature of content analysis in the examples provided is based on the frequency and the construction of representations in the media. It does not take into account the personal perspective of the individual African groups in discussion. I conducted the cross-sectional survey online; in this section, the participants were asked a series of questions to gauge what media sources they predominately consumed and for what purpose. This was the catalyst to start to explore some of the general ideas that they had about the media. By conducting a national study, it will enable me to cast a wide net on participants from a range of geographic areas, within which various individuals will have different immigration backgrounds as well as belonging to a range of socio-economic, national and cultural backgrounds. This approach will allow for a large and diverse sample size that will create a rich data sample of African immigrants living in Australia and how they perceive their mediated representations as well as their social perceptions. Using the cross-sectional methodology is not without its criticisms, surveys can be vague and subjective in their interpretation In this section, I aim to provide an overview of the data collected in the cross-sectional survey, so as to satisfy two goals. The first, to show the breakdown of the demographic surveyed, as well as to highlight the media attitudes of this demographic. This level of transparency will allow me to demonstrate a contradiction to the common knowledge of Africans pushed by ideological institutions that seems to purport that all Africans are Sudanese, male and dangerous (Brabazon & Chivaura in Tara Brabazon Podcast, 2016; Brabazon. T., Chivaura, R., Redhead, S., & Gatwiri in Tara Brabazon Podcast, 2016; Brabazon et al., 2015).