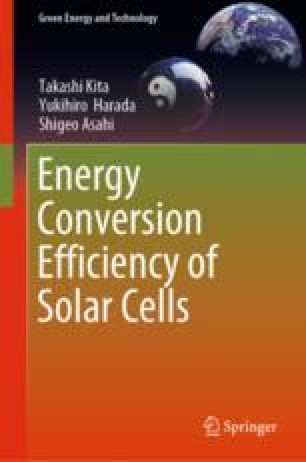 The solar cells that are discussed in this book are based on semiconductors. The degree of difficulty in the explanation of the properties of semiconductors greatly depends on the starting point of the explanations. In this book, we start with the fact that “a semiconductor is formed by a valence band which is completely filled with electrons and an empty conduction band, both bands being separated by a characteristic energy gap.” First, we shall investigate the behavior of the bands in the representative semiconductor silicon (Si) to clarify the band-gap concept. Then, we provide explanations on the intrinsic semiconductors which contain no impurities, and the extrinsic semiconductors wherein impurity atoms with a different number of valence electrons are added. Within the extrinsic semiconductors, we distinguish between the n-type semiconductor with excess electrons that are delivered to the conduction band and the p-type semiconductor with the so-called holes (i.e., missing electrons) that are delivered to the valence band. Regarding these two classes of semiconductors with different electronic conditions, we clarify the details about the density of electrons and holes, their distributions, and the so-called Fermi level (which is the energy level corresponding to an electron occupation probability of 50%). We also consider the transport of electrons and holes inside the semiconductor. Finally, we derive the characteristics of the p–n junction, which connects an n-type semiconductor with a p-type semiconductor and is commonly used for solar cell devices. The present chapter provides detailed explanations from the viewpoint of the semiconductor electronics, which makes it accessible with the knowledge equivalent to that of a third-year undergraduate student. With respect to the structure of the present book, not all details mentioned in this chapter are required for the understanding of the other chapters. In other words, the calculation of the energy conversion efficiency of a solar cell, which is the target of the present book, is based on a relatively independent approach. The reader may omit this chapter, or regard it as a guide to find concrete ideas for improving the conversion efficiencies of semiconductor solar cells. In order to enable an independent study of this chapter on semiconductors, we again define all variables of the previous chapters.