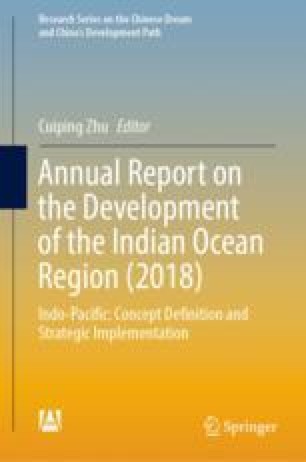 In 2017, the concept of “Indo-Pacific” continues to develop further. The latest sign indicates that the construction of the concept may go beyond “hype” and enter the strategic level, and even to the specific deployment. At the same time, a series of regional effects and chain reactions brought about by the strategic adjustment of great powers and the reshaping of international relations have gradually emerged under the construction of the “Indo-Pacific” concept. For example, Trump hypes the concept of “Indo-Pacific” and the “Indo-Pacific strategy” of the US surfaces gradually. The relations between the US and India continue to develop further with bilateral defense co-operations on the rise in both frequency and quality. The Sino-Indian relations have declined significantly, and the flattening trend of the strategic triangle among China, the US and India has become more prominent. Japan and India have accelerated their strategies cooperation, and the security dialogue among the four countries is re-launched. Small and medium-sized countries in the relevant regions have actively engaged in strategic speculation and power rent-seeking. All of these events have exerted pressure on China’s geopolitical security and rise. As far as the influence of the “Indo-Pacific” construction on South Asia is concerned, it has not only enhanced the strategic position of South Asia in global geopolitics, but also deepened the imbalance of power structure here. It has strengthened the strategic role of India, but increased the rift in international relations in South Asia. It has greatly raised the strategic importance of Sri Lanka and the Maldives in the Indian Ocean, but almost completely ignored the inland areas of Bhutan, Nepal and Bangladesh. It has not only made different South Asian countries enjoy different environment in international strategies, but also restricts the formation of regional cooperation and regionalism in South Asia. The New South Asia Strategy of the Trump Administration, in particular, may further tear South Asia from the security strategy, while the increasingly tough South Asian Policy of India in the Modi era may further deteriorate the international isolation of regional countries to Pakistan, and may even exclude and hinder China’s efforts to promote economic integration and regional stability in South Asia.

“Indo-Pacific” “Indo-Pacific Strategy” Regional effects New South Asia Strategy of the US South Asia Pattern
This is a preview of subscription content, log in to check access.