Asia and the Drafting of the Universal Declaration of Human Rights 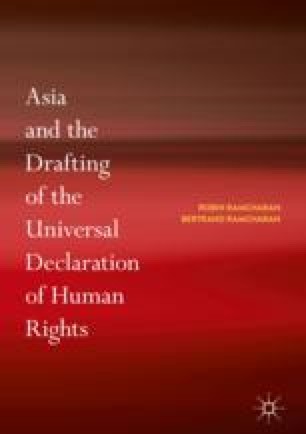 Universal values in the UDHR were crafted between 1946 and 1948, in the Commission on Human Rights, and approved by the UN General Assembly on 10 December 1948, with eight abstensions only. A Drafting Committee of the Commission was set up, initially with three members and then expanded to eight, which included Asian drafters from China, India, and Lebanon. Debates over the form and substance resulted in the UDHR Model, an authoritative list of “universal” rights, that would be non-binding and that would be followed by the negotiation of two conventions. The Declaration, drafted in the immediate aftermath of genocidal wars in Europe and Asia and amidst Asia’s struggle for self-determination from colonial rule, was the most intensively debated document in world history. A draft, compiled initially by Prof. John Humphrey in the UN Secretariat, was adopted by the Drafting Committee, debated in the Economic and Social Council and further scrutinized in the United Nations General Assembly. It is a political document that was very much influenced by Asian drafters and states from the Global South.

Human Rights Nuclear Missions Qing Code RightsAfrican Charter Mahatma GandhiGandhi
These keywords were added by machine and not by the authors. This process is experimental and the keywords may be updated as the learning algorithm improves.
This is a preview of subscription content, log in to check access.