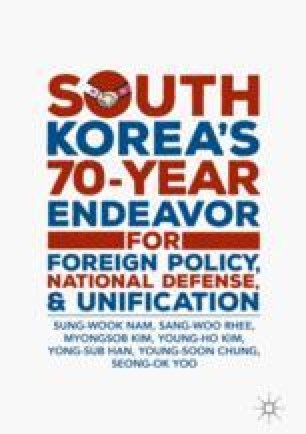 This chapter introduces the reader to the geo-historical reality of two Koreas, that is, Joseon and Hanguk, in international history. The Imperial Daehanguk declared in 1897 was distinguished from the previous Joseon dynasty. The Imperial Japan forcefully annexed the Imperial Daehanguk and resurrected the old name of Joseon used under the Ming and Qing Empire before the declaration of Independence in 1897. The second embodiment of Korean sovereignty was the Provisional Government of the Republic of Korea (ROK) established in 1919. However, this was not recognized in international society as a modern political entity. The third embodiment of Korean modern sovereignty was its establishment on August 15, 1948. The Independence of the ROK was recognized on December 12, 1948, at the 3rd UN General Assembly. The separate establishment of Hanguk (ROK) and Joseon (Democratic People’s Republic of Korea [DPRK]) recognized by some Communist countries in 1948 was the result of the ideological confrontation, Democracy versus People’s Democracy (a pre-step to Communism), at the beginning of the Cold War. During and after the Cold War, the DPRK in Pyongyang has been arguing its national legitimacy of Joseon. Under the nuclear and ideological threat of Joseon (DPRK), it is necessary to recognize both the commonality and the difference between Hanguk and Joseon, and to take a Westphalian approach with an accurate understanding of the geo-historical reality of two Koreas.

Joseon Pyongyang Democratic People’s Republic Of Korea (DPRK) Korean Sovereignty Qing Empire
These keywords were added by machine and not by the authors. This process is experimental and the keywords may be updated as the learning algorithm improves.

President of the Korean Association for Political and Diplomatic History, Author of War and Peace: The 6.25 War in Korea and the Birth of the Korean Armistice Regime