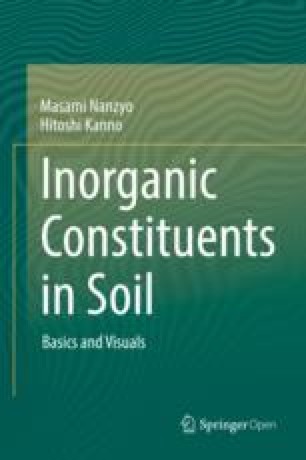 Soil plays a major role in ecosystem services (an ecological term referring to the benefits granted to humans by ecosystems). Among the various ecosystem services, provisioning services are important providers of foods, fibers, wood, and other naturally sourced materials. To increase biological production while maintaining sustainable soil and ecosystems, we must understand element cycling in soils and ecosystems and its high dependence on inorganic constituents. This monograph describes the fundamentals, along with visual aids, of inorganic soil constituents for beginning students of soil science, environmental science, biogeochemistry, and interested readers in other disciplines. The visual aids include optical photographs, electron microscope images, and element maps acquired by energy dispersive X-ray analyses.

1.1 Ecosystem Services as an Embodiment of Soil Functions

An ecosystem is characterized by a wide variety of organisms, and soil is essential for the survival and activities of terrestrial organisms. Ecosystems are strongly dependent on, and also affect, the properties of their soils. Under these conditions, ecosystems provide various services to humans (known as ecosystem services). The Millennium Ecosystem Assessment (2005) report describes four main classes of ecosystem services:

Among the supporting services is “soil formation,” which includes the functions of biota and organic and inorganic constituents in the soil. Digestion of biogenic residues and reuse of nutrient elements constitute “photosynthesis and nutrient cycling.” Soil supports the digestion of biogenic residues and the reuse of nutrient elements, and it plays a nutrient-retention role, at least temporarily. Humans utilize the supporting services to obtain provisioning-service products, such as foods, fibers, and woods, although agricultural production is often enhanced by the application of fertilizer.

Related to ecosystem services, soils are also involved in landscapes. A landscape is formed by the interactions among soil, topography, climate, and communities of organisms (plants and animals). The ecosystem services provided by landscapes may be recognized as cultural services, for example, areas for recreation and motifs in paintings. Different landscapes are often underlain by different soils. The regulating services offered by soils include the holding and movement of water, maintenance of water quality, and adsorption and desorption of solutes.

Soil-supported ecosystem services contribute greatly to our survival and to environmental sustainability. To maintain and improve our physical and cultural health, we must understand the roles of soil in ecosystem services and develop methods that conserve and facilitate soil functions.

1.2 Elements Important for Ecosystem Services and Environmental Factors Affecting the Behavior of Inorganic Constituents in Soil

As the primary producers in ecosystems , plants absorb inorganic nutrients from soil. Plants and animals occupy the natural, agricultural, and urban landscapes formed by soils. Hence, the behavior and cycling of nutrient elements in soils and ecosystems is critically important. Nutrient elements (elements that are essential or beneficial to plants and/or animals) are transferred to animals from plants through the food chain. Therefore, feed production must meet the nutrient-element demands of animals. Cycling of these nutrient elements is affected by environmental factors such as soil properties, temperature, water, redox condition, carbon dioxide, and light.

The major essential elements for plants are C, H, O, N, P, K, Ca, Mg, and S. Plants also require trace amounts of Fe, Mn, Cu, Zn, B, Mo, and Cl (Fig. 1.1) (Marshner 1995). Ni is another essential trace element for plants (Asher 1991), and Si and Na are beneficial to some plants. In agricultural plant production, it is essential to provide these elements to plants in appropriate amounts from the viewpoints of both economics and environmental conservation. Excessive application, especially of N and P, must be avoided because these elements cause eutrophication problems when released into rivers, lakes, or bays.

Essential elements for animals include F, Cr, Co, Se, and I (Nielsen 1984; Haenleina and Ankeb 2011). For example, animals in New Zealand have been reported as Co deficient in the case that their animal feeds were produced in Co-deficient soil (Lee 1974).

Chapter  2 focuses mainly on the primary minerals in soil, that is, minerals that have not been chemically altered since their deposition and crystallization from molten lava. Primary minerals are abundant in the silt-and-sand fraction (particle-size fraction with diameter > 2 μm) of soil. The primary minerals provide physical strength to soil and contribute to soil formation through dissolution or weathering at various speeds. The elements released by the weathering of primary minerals include nutrients for organisms.

Chapter  4 discusses the non-crystalline soil constituents that characterize many areas of volcanic activity. Under good drainage conditions, volcanic glasses alter to non-crystalline materials such as allophane, imogolite, and Al–humus complexes. All of these materials are highly reactive with phosphate, show variable charge properties, and have characteristic physical properties . Phytoliths are another non-crystalline silica material frequently found in humus-rich horizon soils. Phytoliths are a possible source of Si for plants.

Reducing conditions result from submergence of soil and microbial activity. The chemical forms of redox-sensitive elements, including many nutrient elements, differ under reducing and oxidizing conditions. Redox-sensitive inorganic soil constituents are discussed in Chap.  5.

Chapter  6 introduces three topics related to inorganic constituents in soil, namely, tsunami-affected soils, Cs-affected soils, and phosphate reactions in the soil–plant system. The huge tsunami that struck the Pacific coast of eastern Japan in March of 2011 inundated coastal areas with a large volume of seawater. Tsunamis affect soil mainly by erosion, deposition, and by increasing the salt concentration in soil water and the exchangeable Na. Although exchangeable cations are a part of silicate minerals, they are highly sensitive to solute changes in soil water. The 2011 tsunami also destroyed the Fukushima Daiichi Nuclear Power Plant, depositing large amounts of radioactive elements on the soil surface. The behavior of radiocesium in the soil–water system is described. Finally, this chapter discusses the phosphates related to soil–plant systems. The behavior of phosphates , whether inherited from parent materials or applied as fertilizers, is closely related to the inorganic constituents of the soil.

Many complete texts and references about minerals in soil are already available (Dixon and Weed 1989; Dixon and Schulze 2002; Huang et al. 2012; Deer et al. 2013). These materials systematically describe the crystallography, properties, formation, and occurrence of the mineral constituents and are recommended for further study.

This section, except for the final paragraph, describes the various methods mainly used to collect the results presented in succeeding chapters. Particle size fractionation is effective for studying the inorganic constituents in soil. Primary and secondary minerals were prepared by routine treatments of soil samples, such as air-drying, gentle grinding with a mortar, dry sieving, H2O2 digestion, and ultrasonic treatment (Gee and Bauder 1986). After dispersion, the particle sizes were fractionated by wet sieving and siphoning. Dispersion was maximized by adjusting the pH. Alkaline conditions (pH = 10.5) are effective for crystalline clays. Primary minerals were treated with dithionite-citrate-bicarbonate (DCB) when necessary. DCB treatment was also used for X-ray diffraction analysis of the clay fraction (Harris and White 2008). Heavy and light minerals were separated using a heavy liquid. This method is effective, but it is affected by composite mineral particles, which are not rare in soils.

The micro-scale morphological properties of soil inorganic constituents were revealed in scanning electron microscope (SEM) (White 2008) and transmission electron microscope (TEM) (Elsass et al. 2008) images. For SEM observation, air-dried sample particles were held on double-sided sticky tape. Polished sections were used to reveal the two-dimensional structures of inorganic soil particles, soil clods, and rice–root bundles. To avoid charging, the samples were coated with vacuum-evaporated carbon. Alternatively, Pt–Pd coating was applied if the carbon coating was insufficient. For TEM observation, sample particles were supported on a copper mesh by a collodion membrane. Allophane and imogolite were observed on a TEM microgrid. TEM photographs were obtained by a Quemesa digital camera. Both the SEM and TEM observations were carried out under high vacuum. For morphological observation and energy dispersive X-ray (EDX) analyses (Guillemette 2008), the accelerating voltage of the SEM was typically set to 15 kV, but it was sometimes set to 3 kV for detailed morphological observations. Most of the SEM and TEM observations were performed on Hitachi SU8000 and H-7650 instruments, respectively.

The elemental compositions of inorganic constituent particles and the distribution of elements can effectively identify the particles and may reveal chemical reaction products. This monograph presents many EDX spectra as visual examples of the element abundances of inorganic soil constituents. Elemental compositions were analyzed from the characteristic X-ray spectra of the samples (Fig. 1.2) obtained by EDX. Metals heavier than Fe are rare among the inorganic constituents of most soils. The relative abundances of the elements can be roughly estimated from the heights of the peaks of the characteristic X-rays in the spectra although the elemental composition is accurately calculated in quantitative analysis using an equipped software. In early work, EDX analyses were usually performed on a Kevex apparatus, but more recent analyses were performed using an EDAX Apollo XV.

Points of attention for EDX analytical results include overlapping of characteristic X-rays, the position of the X-ray detector, and some others. Among the overlapping of characteristic X-rays mentioned in the EDX manual, FKα – FeLα and PKα – ZrLα may sometimes be encountered when observing inorganic constituents in soil. As the X-ray detector is installed diagonally upward from the sample, unevenness in the sample surface affects the effectiveness of the detector for detecting characteristic X-rays, and the X-ray intensity from the opposite side of the sample is weak. Also, shadows are formed in the element maps of particle samples of soil inorganic constituents. To avoid the effects of uneven samples, it is necessary to use adequately flat or polished sections with soil inorganic constituents embedded in resin.

The images or other third party material in this book are included in the book's Creative Commons license, unless indicated otherwise in a credit line to the material. If material is not included in the book's Creative Commons license and your intended use is not permitted by statutory regulation or exceeds the permitted use, you will need to obtain permission directly from the copyright holder.