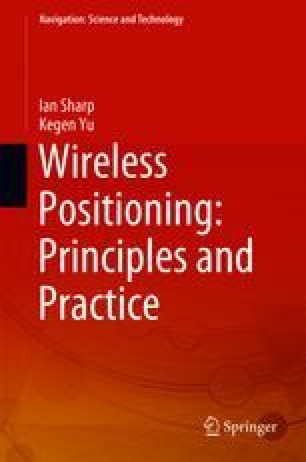 Indoor Radio Propagation Multipath Pulse Excessive Delay Leading Edge Diffraction Path
These keywords were added by machine and not by the authors. This process is experimental and the keywords may be updated as the learning algorithm improves.
This is a preview of subscription content, log in to check access. 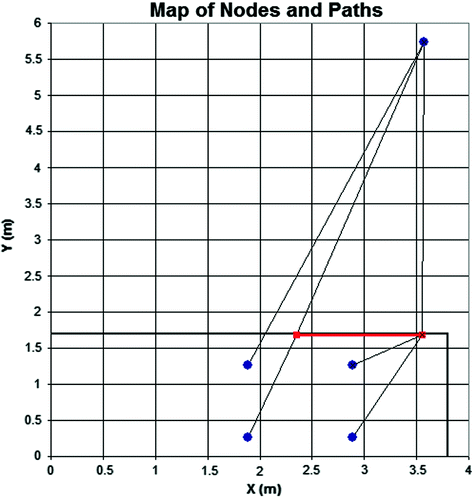 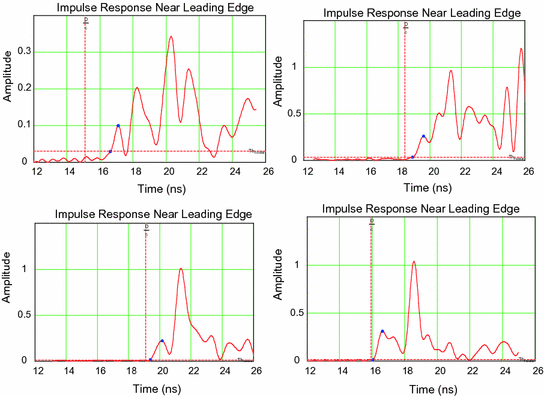 This Annex provides the results of experiments of measuring delay excesses where the propagation is through a wall dividing two rooms in a building, and with an intervening obstacle requiring path diffraction. This experiment provides some validation of the theoretical analysis described in Sect. 13.5.

To provide some actual data on the delay excess through walls, some UWB (6–9 GHz) measurements were performed. The effective rise time of the pulse is about 0.5 ns, (equivalent to about 15 cm), with an effective pulse resolution of about 1 cm in the multipath environment. The experimental setup is shown in Fig. 13.13. The four points on one side of the wall are at the corners of a 1 m square, with the side closest to the wall about 0.4 m from the wall and parallel to the wall. The receiving point is on the other side of the wall at a distance of about 4 m. The wall is made of wood (plywood with wooden studs), but the wall also includes a metal-backed whiteboard which obscures the straight-line path from two of the transmitting points to the receiver. The whiteboard has a steel backing which cannot be penetrated by the radio signal, so there will be diffraction around the whiteboard in these two cases.
Figure 13.14 shows the details of the measured impulse responses of the four measurements through the wall. The signal is UWB 6–9 GHz, with a range of \( D = 5 \pm 0.5 \) m through a wall, with the path approximately normal to the wall. The signal epoch is measured where the signal exceeds the noise threshold level, and is shown by a dot in the figures. The local peak on the leading edge is also shown by another dot; note that this local peak has a much smaller amplitude than the signal peak, and is considerably delayed relative to the first peak. The straight-line distance propagation delay between the transmitter and the receiver in each case is also shown. The measurement error is the difference between the epoch time and the time \( D/c \).

The figures can be interpreted as follows. The first case (top-left) has a propagation excess of about 1.5 ns, even though the threshold algorithm correctly detects the first (small) signal above the threshold. This result is a consequence of the diffraction around the whiteboard. Also observe a second peak with about a delay excess of 2.7 ns is associate with diffraction around the other edge of the whiteboard. The second case (top-right) is similar, although the first signal is smaller due to the greater diffraction losses. In contrast, the last two cases are not obscured by the whiteboard, and the delay excess is small. For a wooden wall (plywood) the delay excess can be just a few centimetres. For example, applying the theory in Sect. 13.4.1 with two plywood sheets of thickness 6 mm gives a mean delay excess of 10 mm, which is about the measurement resolution.

The data for these four cases are summarized in Table 13.3. The results in the table give data on the true range, the diffracted path range, the measured range, and an estimate of the wall excess. The measured range excess and the diffraction excess are generally in reasonable agreement. The difference between these two measurements are nominally the extra delay associated with the wall. Because the expected wall excess is about 1 cm, and the measurement resolution about 1–2 cm, accurate estimates of the wall excess delay is not possible.
Table 13.3

Summary of the measured path delay excesses for the four cases in Fig. 13.14

In conclusion, the results in this Annex suggest that the delay excess associated with a wall can vary widely, depending on the details of the construction of the wall. For a wooden plywood construction the mean delay excess will be about 1 cm, but a brick wall can be about 20 cm. Further, if there are opaque obstacles such as the whiteboard in the above example, the delay excess will be associated with the diffraction around the obstacle, not the details of the wall construction. Thus in a large building with a variety of wall types and obstacles, deterministic measures of the delay excess are not feasible, but statistical parameters (mean, standard deviation) could be determined.