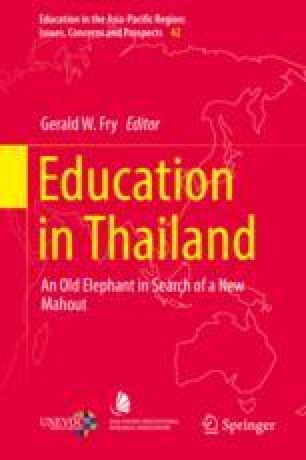 The Evolution of Education Reform in Thailand

This chapter focuses on the evolution of Thai education reform in three major phases (with a special focus on the reform associated with the National Education Act of 1999), its actual implementation, success and failure, and influences on issues of quality, equity, and decentralization. The first reform of Thailand’s education system began during the reign of King Chulalongkorn more than 100 years ago. Education previously provided at homes, temples, and palaces was replaced by a formal school system. The second major reform occurred after the “student revolution” of 1973. There was then a strong demand from society to reform education so as to promote people’s equal opportunity and freedom of speech and thought. Unfortunately, the education reform proposal was rejected by the rightists for fear of communist influence on the proposal. However, some legacies of the reform became reality such as a new curriculum, change in the structure of education to a 6-3-3 system, and transfer of rural primary education from the MOI to the MOE. The third wave of education reform occurred after the promulgation of the 1999 National Education Act, which was aimed at expanding educational opportunity for all Thai people to have access to at least 12-year basic education without charge, raising the quality of education, and promoting student-centered and lifelong learning. However, though almost two decades have passed, it seems the reform goals are still far to reach due to the discontinuity of authority concerned and the frequent change of governments and ministers of education.