Agriculture as a Metaphor for Creativity in All Human Endeavors 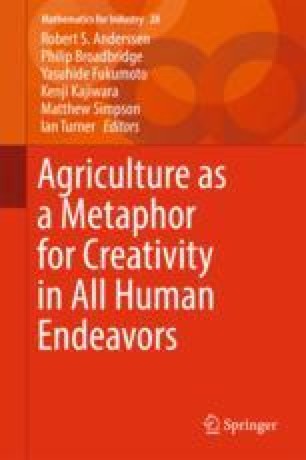 FMfI 2016: Agriculture as a Metaphor for Creativity in All Human Endeavors pp 7-11 | Cite as

Plasmodium falciparum malaria remains a major threat to global public health. Artemisinin-based combination therapies—a critical component of current control strategies—are at risk of failure due to the emergence of artemisinin resistance. To extend the life of artemisinin-based therapies, it is crucial that we develop a better understanding of how they act to reduce parasitemia in the host. Recent laboratory-based experiments have demonstrated that parasites respond to the cumulative, rather than instantaneous, drug concentration. This observation directly challenges the standard paradigm of pharmacokinetic–pharmacodynamic (PK–PD) modelling. Here, we introduce a generalisation to the PK–PD model which accounts for cumulative exposure. Parasites accumulate ‘stress’, which translates into an effective killing rate which can vary with both drug concentration and exposure time. Our model indicates how drug-resistant parasites may avoid killing. Through simulation, we explore alternative drug dosing strategies that may overcome drug resistance.

Artemisinin derivatives (ART) provide the first-line treatment for falciparum malaria, a major parasitic disease affecting millions of people every year [1]. Their extensive use over the past decade has dramatically reduced the burden of malaria on human populations. However, over recent years, clinical signs of drug resistance have become established in South-East Asia and ART therapy is now at risk of failure [2].

Laboratory experiments, conducted by collaborators at the Bio21 Institute (Melbourne), have established that the dynamics of drug killing are complex [4, 5]. Not only do parasites display stage-specific sensitivity to ART, the rate of parasite killing appears to depend upon the cumulative exposure of parasites to drug, rather than the instantaneous drug concentration. Furthermore, in experiments with ‘drug-resistant’ parasite strains, a clear loss of sensitivity to the drug was observed during the ring stage of the parasite’s life cycle.

In this context, understanding the mechanisms and dynamics of drug-induced parasite killing requires the development of new PK–PD models of drug activity and parasite response [3]. The development of improved models may prove crucial in optimising drug regimens to either overcome or delay the onset of drug resistance and improve clinical outcomes.

Here, we introduce a model of parasite killing in the presence of a time-varying drug concentration and extend the PK–PD modelling paradigm to account for drug accumulation effects.

We used model (2) to fit the available age/stage-specific in vitro data. For each of the four parasite stages (early rings, mid-rings, early trophozoites and late trophozoites), we obtained (stage-specific) estimates for \(\lambda \), \(\alpha \), \(\beta _1\) and \(\beta _2\). With these estimates—which show strong evidence for drug accumulation effects (i.e. \(\lambda \) is small, data not shown)—we then simulated realistic in vivo PK–PD curves and explore the effects of drug accumulation.

Figure 1a shows how the overall killing rate k evolves for the mid-ring stage of the parasite life cycle given a typical PK (drug concentration) time profile. The trajectory in black is for \(\lambda = 0.37\), as estimated from the in vitro data. Curves for slower accumulation of ‘stress’ (\(\lambda = 0.1\), red) and more rapid accumulation (\(\lambda = 1.0\), blue) are also presented to highlight the potential biological importance of drug accumulation. It has been suggested that drug resistance may manifest as an increased tolerance to drug for the parasite [5]. We model this possibility as a reduction in \(\lambda \) for the mid-ring stage of the life cycle. Figure 1b illustrates the dramatic effect on the parasite load over time resulting from this increased drug tolerance for a realistic scenario of multiple drug doses (following the standard drug regimen as recommended by the World Health Organisation).
Having established how an increased tolerance to stress manifests as a delay in clearance, we now use the model to explore alternative drug dosing regimens. Figure 2 presents results for two widely suggested alternative regimens: increasing dose concentration and increasing dose frequency. We apply these alternative dosing regimens to a simulated 3D7 infection (i.e. \(\lambda = 0.37\)). For an initial parasite distribution in the host that is primarily rings (a) or trophozoites (b), we observe a clear benefit in twice daily dosing. In contrast, marginal benefit is obtained through increased dose concentration (4mg/kg vs. 2mg/kg).

Based on detailed in vitro experiments and an extension to the traditional PK–PD modelling framework, we have explored the potential role for drug accumulation effects in antimalarial activity. Our findings provide new insight into the mechanisms of drug-induced parasite killing and an enhanced predictive platform for evaluating the likely efficacy of alternative ART dosing regimens.

We thank Leann Tilley and her team (Bio21, The University of Melbourne) for access to data. Pengxing Cao and Sophie Zaloumis were supported by National Health and Medical Research Council project and Centre for Research Excellence funding.