Issues on Health and Healthcare in India 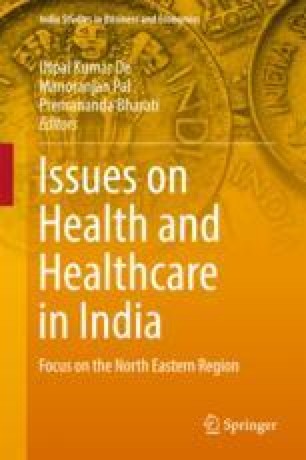 In India, northeastern region constituted of eight states having a low symmetry of poverty, non-development and insurgencies. On the other, it is unique in a sense that it has more or less similar economic and geographical attributes in all these states. In such a preface of northeastern region, the major objective of the present study are (i) to see the magnitude of difference of Chronic Energy Deficiency (CED) between poor and non-poor women; (ii) its variation across the states, and (iii) to see the probable reason for variation, if any. The data set is constituted of 9402 women from eight states in Northeast India of NFHS-3, 2005–2006. BMI is considered as a measure of undernutrition. Some socioeconomic variables are also considered as causal effect to nutritional status. For each state, economic classification such as poor and non-poor group has made through the wealth index of the family. To determine the relationship between CED of women by poor and non-poor, the percentage of poor CED women is subtracted from that of non-poor women. Thus, a positive sign means poor women are more affected than non-poor women while negative sign means the opposite. Categorical logistic regression has performed between dependent (nutritional status) and independent (socioeconomic) variables to establish the probable reason for cause and effects of differences. The salient findings are that there is a large disparity between the occurrence of poor and non-poor conditions as well as undernutrition in different states of Northeast India. The basic deviation from non-poor and poor women—higher education, service holding, safe drinking and toilet facility—have a positive impact on undernutrition. The implications of the other findings are discussed in the chapter.