Quality of Secondary Education in India 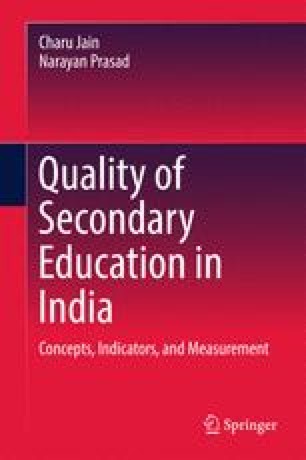 Quality of Secondary Education in India pp 79-106 | Cite as

The recent initiatives undertaken for the universalization of elementary education has led to a dramatic growth in enrolments and improvements in retention and transition rates for elementary education, thereby resulting in an increased demand for the expansion of secondary education. Meeting this demand is essential firstly because secondary education forms the bridge between elementary and higher education, and secondly, the required input fulfils large manpower needs of the semi-organized and organized sectors of the economy. Also, investment in secondary education yields considerable social and private returns, offering young people the chance to acquire attitudes and skills that are unlikely to be developed in the primary grades. However, it is seen that as access to secondary education has expanded, its overall quality has often been on the decline as overstretched resources has combined with less efficient systems. Low participation rates and poor quality at the secondary stage are a bottleneck in improving both higher education participation and schooling at the elementary stage. In the light of the foregoing discussion, the present chapter aims to provide an in-depth review of trends in growth and performance of secondary education at the national level, covering various aspects such as expansion or access in terms of student enrolments, number of institutions, teachers, gender parity indicators, dropouts, transitions, etc. Along with these, the chapter also throws light on the management and financing issues of secondary education in India. Further, it evaluates the relationship between secondary education at the national level and socio-economic outcomes such as economic growth, health, demographic transition, employment, and income level. This is followed by the last section that summarizes major findings of the chapter.