The Development of Railway Technology in East Asia in Comparative Perspective 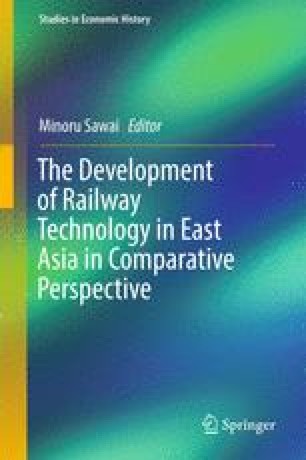 It was a bureau of manufacturing of the Japanese National Railway (JNR) that decisively controlled the development of locomotives and rolling stock in modern Japan. Largely depending on higher technical educational organizations outside Japan proper in the supply of engineers, railways in the Japanese empire were organized into the structure of ellipse with two centers of the JNR and South Manchuria Railway (SMR) . The process of railway technology development in Japan before the First World War could be divided into four stages: (1) transfer of ﻿﻿railway systems from the UK by the Japanese government in the 1870s and the 1880s; (2) acquisition of railway materials from the US and Germany and diversification of technology in the 1890s; (3) standardization and convergence of technology through the merger and nationalization of railway networks in the 1900s; and (4) the development of original technology by the government railway in the 1910s. SMR emphasized a technology transfer from Western world based on management stabilities and tried to manufacture its own railroad cars by itself, then participated in the world competition of the limited express passenger train in the 1930s. On the other hand, postwar Taiwan Railway Administration recovered from the damage of the war and developed from the old power to “dieselization” during the postwar to the US aid period, and locomotives were changed from the Japanese-made to American-made in the purchase process under the US aid. Lastly from the perspectives of comparative history, we compare the nationalization process of railways in Japan and Germany. As characteristics of expansion process of the “national” railways in Kingdom of Prussia, we could confirm two points: tradition of federated decentralization of authority and halfway centralization of power that was shown as absence of functional equivalent to Tetsudô In (Agency of Railways) in Japan.