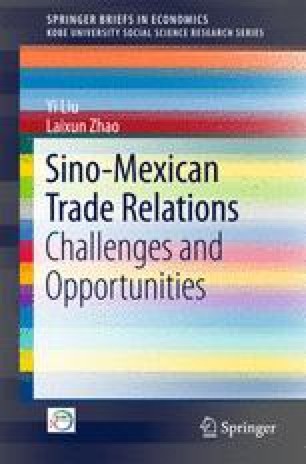 Economic Policies in China and Mexico

This Chapter reviews the history of Mexican and Chinese economic policies during the 1980s and 1990s, in order to give readers a background of the potential challenges and opportunities between these two countries. In the first part, the constraints of economic development and results of the ISI policy are reviewed. This is followed by a review of the Mexican economy on the eve of its debt and currency crisis in 1994, providing an analysis of its disruptive effects on the overall economy. Moreover, this chapter also introduces the Chinese economic policies during the same period, when its “Reform and Opening up Policy” first started in 1978. Since then, China has gradually adopted ownership reform, trade liberalization, industrial reform, etc. Contrary to the “dual economic structure” (the unbalanced development of agricultural and industrial sectors) and the population boom in Mexico, China has promoted a more harmonized improvement of its economy. Further, China suffered a boom of population during the “Great Revolution” due to Mao’s orders that “it is easier to get the job done with more people,” subsequently resulting in the population being strictly controlled after Mao’s death, by the “One-Child Policy” for more than 30 years.