Clean and Sustainable Groundwater in India 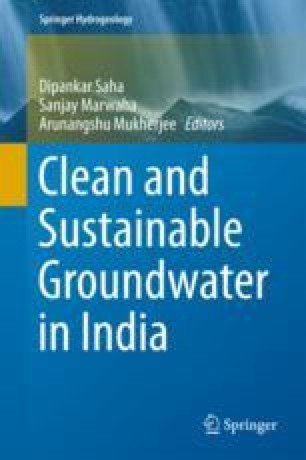 Clean and Sustainable Groundwater in India pp 81-94 | Cite as

Nalgonda District is widely known as one of the fluorosis endemic districts of India. Groundwater quality from Cherlapalli watershed, Nalgonda District, is evaluated with reference to fluoride. In the present study, concentration of fluoride is reported as high as 7.1 mg/L, while NO3 − reaches up to 490 mg/L. Higher F concentrations are detected in highly weathered and fractured zones in structurally controlled central part of the area. Vertical variation in fluoride concentrations is observed down to 120 m depth, indicating local geological influence. F− and Ca2+ show moderate degree of negative correlation, indicating F− enrichment by removal of Ca2+ during rock-water interaction. Positive correlation between Na+ and F− and pH and F− reveals that Na+ is released into groundwater under alkaline conditions. Groundwater is mainly of Na–Mg–HCO3- and Na–HCO3 types. It is recommended that for drinking use surface water be blended with groundwater in fluoride-affected areas under the proposed Water Grid Project by local Government. Artificial recharge measures through percolation tanks and check dams are recommended in the central part where thick de-saturated weathered zone is available. De-silting of existing tanks under the ongoing Govt.-sponsored Mission Kakatiya may be taken on priority basis in the area.