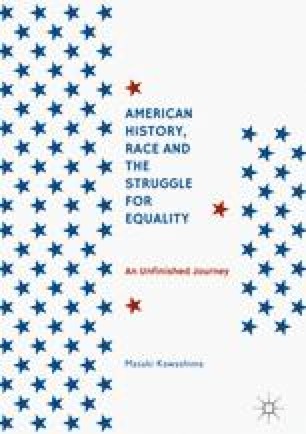 American History, Race and the Struggle for Equality pp 143-163 | Cite as

New Immigrants and the “Underclass”

This chapter begins with the riot in Los Angeles, California, in 1992. It was remarkable for two reasons: not only African Americans but Hispanics/Latinos and poor whites participated in looting; and most of the victimized shopkeepers were Koreans, not whites. The second theme covered in this chapter is that of the rapid increase in the number of nonwhite newcomers since the Immigration Act of 1965, consisting of Hispanics/Latinos, Asians, and Blacks from the Caribbean and West Africa. The third section focuses on the “underclass,” and the last section investigates the reasons why “race” remains in U.S. society by taking into consideration the favorable aspect of the racialization of minorities.