‘Out of School’ Ethnic Minority Young People in Hong Kong 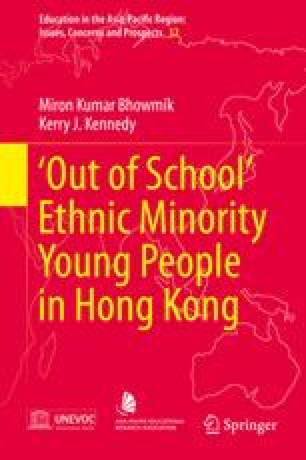 Ethnic Minority Students at Risk of Dropping Out

Four students at risk of dropping out of their schooling are profiled. All were Pakistani with three born in Hong Kong, and one in Pakistan, who subsequently moved to Hong Kong in his late primary years. At the time of their interview, one student was studying in primary school and the others in secondary school. The primary school student was over-aged and not offered an age-specific grade level when he was admitted to the school. Their lives inside and outside of school are depicted. The case studies report information on their background, schooling, a typical day, and their future plan. Interview data from the teachers who considered them to potentially be at risk of dropping out of school are also included. Factors contributing to their risk of dropping out were at the individual, family and school levels. The individual level included attendance and low academic issues. The family level included poverty and at the school level, low expectations of the teachers towards them. Two factors similarly remarked on amongst the four students were their struggle in learning Chinese and most had experienced some form of racism. The case studies are further explored in a cross case analysis in Chap. 9.

The previous chapter presented case studies of six ‘dropout’ ethnic minority young people with a focus on identifying the reasons for their dropping out and portraying their ‘out of school’ life. This chapter will be concerned with four other ethnic minority students who were at risk of dropping out. The reasons why they were at risk of dropping out, and what their ‘out of school’ life are explored – partly the answers to questions 2 and 3 posed for the research reported in this book.

This chapter draws on the case study with four ethnic minority students who were identified by their teachers in schools that these students were at risk of dropping out. There are five sections in this chapter. Sections 6.1, 6.2, 6.3, and 6.4 present the experiences of Abdal Rashid, Taufiq Iqbal, Nadia Bashir, and Sahid Afridi respectively. While Abdal Rashid was from a designated primary school, Mong-shuen school, the other three participants were from a designated secondary school, Woo-ping school. Abdal was identified by the Chinese language teacher Ms. Snow Ngai at Mong-shuen school, and Taufiq, Nadia and Sahid were identified by liberal studies and geography teacher Mr. Tim Jordan at Woo-ping school. Each case provides student background information, their family, schooling, and life experiences in Hong Kong. We also present in detail the reasons for their being at risk of dropping out and depict their life outside school. While their case studies provided a vivid picture of their life in both school and outside school, several themes were created from their accounts that explain why they were at risk of dropping out. Each of the four participants was interviewed once in their respective school for about 2 h each. The interview data with Ms. Snow Ngai and Mr. Tim Jordan are also incorporated in presenting Abdal’s case as well as the cases of Taufiq, Nadia and Sahid respectively. Ms. Ngai allowed the first author of this book to interview Abdal alone but Mr. Jordan remained present during the interviews with Taufiq, Nadia and Sahid. However, Mr. Jordan did not intervene anything during the interviews with his three students. The chapter concludes by providing a summary in Sect. 6.5. These case studies provide part of the data for the cross case analysis presented in Chap. 9.

Primary School Mathematics Teacher General Study Language Policy Academic Result
These keywords were added by machine and not by the authors. This process is experimental and the keywords may be updated as the learning algorithm improves.
This is a preview of subscription content, log in to check access.