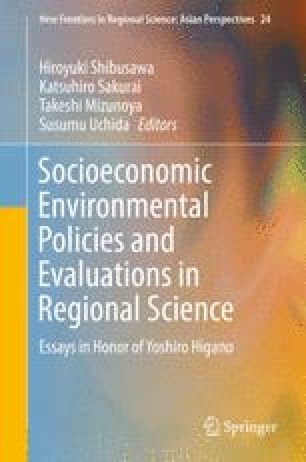 Evaluation of the Water-Environment Policy in the Toyogawa Basin, Japan

This study develops a socioeconomic model to evaluate the water-environment policy for the Toyogawa Basin, Japan. The Toyogawa Basin is located in the East Mikawa area, which lies in the southern part of Aichi Prefecture. The basin has an area of 724 km2, which spreads from the urban bay area in the south to the rural mountainous area in the north. In particular, the basin’s southern area has been developed since the area’s water for household, agricultural, and industrial uses is supplied by the Toyogawa River. Currently, this development includes high-value-added agricultural systems in the cities of Toyohashi and Tahara as well as the manufacturing base, which includes the automobile industry, beyond the Mikawa Port. Because the area’s water supply also depends on the Toyogawa River, changes in the industrial structure and residents’ lifestyles have resulted in a serious problem of water shortage. This has also caused several policy issues to arise, including environmental preservation in the Mikawa Bay, highway construction, consolidation of municipalities, and the aging and depopulation of communities in the northern mountainous area. However, the water-environment problems such as water contamination have become increasingly important. To clarify the relationship between these factors and determine the best approach to solve these pressing issues, we first analyze regional data of the Toyogawa Basin and construct a system model to clarify the interaction between the regional economy and the water environment in the basin. This model describes ongoing socioeconomic activities and their impact on the water environment in the area. Next, using this model, we will analyze the relationship between the regional economy and water environment and estimate the impacts of the regional economy on the water environment in the Toyogawa Basin. Finally, we evaluate the water-environment policy in the basin via a simulation analysis using the developed model.

This work is partly supported by the Institute of Economic Studies, Rissho University. Thanks are also due to Dr. Ataru Nakamura.