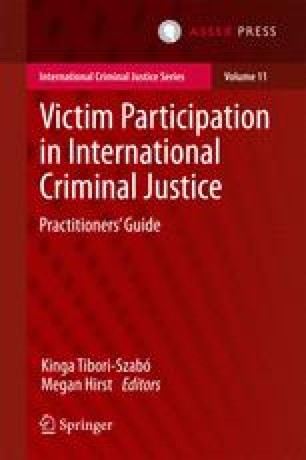 Victims Appearing in Person Before a Chamber

This chapter analyses the approaches taken by the ICC, the STL, and the ECCC in regard to victims who appear in person to provide material to a chamber. This encompasses the situation in which a victim provides views and concerns in person, as well as the provision of testimony by a participating victim or civil party. The rules and practice of the ICC, STL and ECCC vary regarding whether these forms of participation are available to victims, and if so how they can be exercised. Notwithstanding the different approaches, all three courts recognise the value in allowing victim participants to provide information regarding the crimes charged in the indictment, and all take the position that a victim’s participating status does not automatically render his or her evidence less credible. The different approaches taken by these courts can be explained in part by the fact that while victim participants may possess relevant information about a crime, they are also assumed to have an inherent interest in the outcome of the proceedings, whether in the form of a conviction, a particular sentence or being granted reparations for the damages they suffered as a result of the crimes committed. Accordingly, the courts have found various ways to minimise any prejudice caused to the rights of the accused by having participating victims providing evidence or presenting views in person.

Daniella Rudy is a legal officer at the Mechanism for International Criminal Tribunals, The Hague, The Netherlands. The views expressed herein are those of the author alone and do not necessarily reflect the views of the Mechanism for International Criminal Tribunals or the United Nations in general. Megan Hirst is a barrister at Doughty Street Chambers in London and a member of an LRV team in Prosecutor v. Dominic Ongwen. She has previously worked on victims’ participation in the Registries of the ICC and the STL.